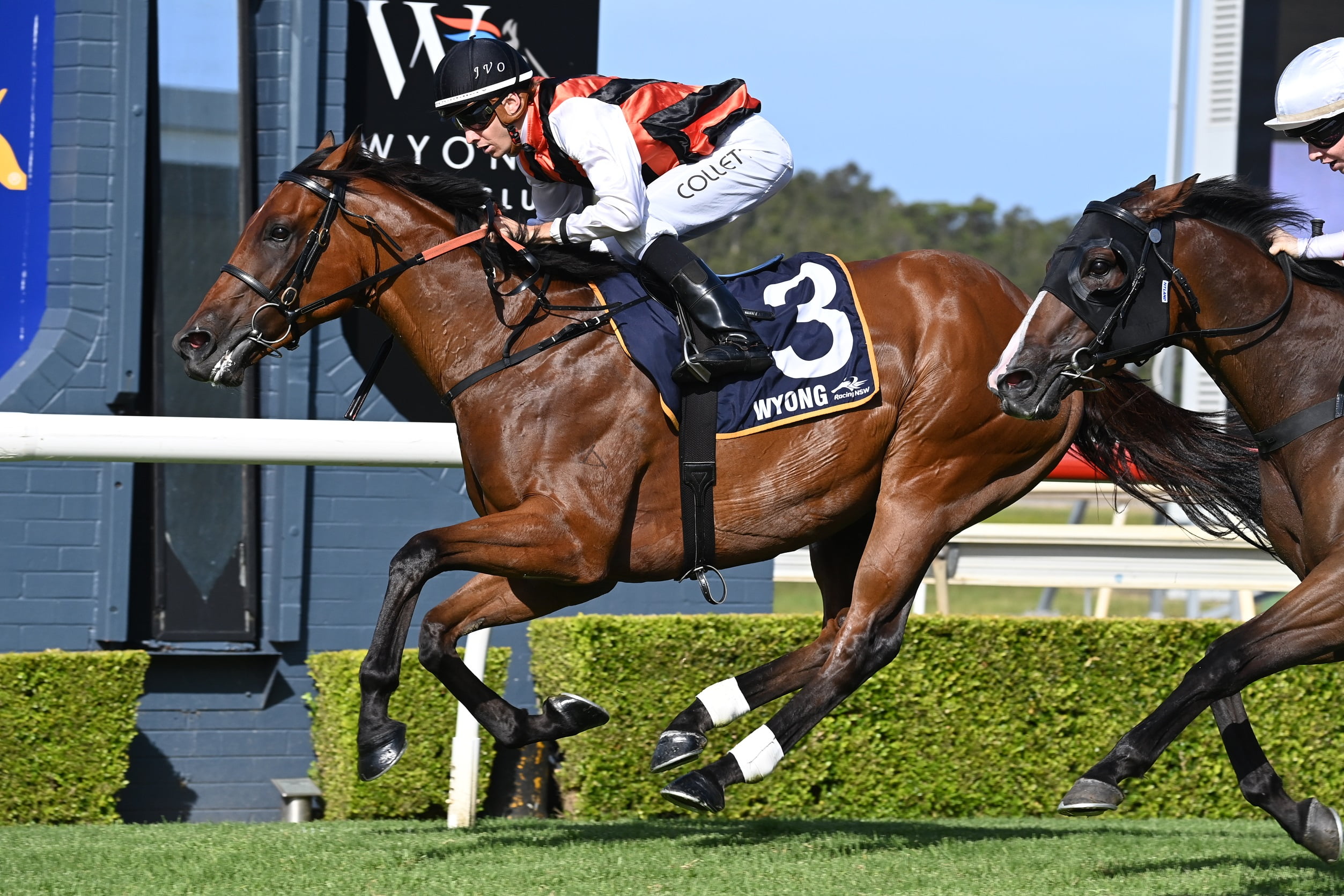 Another super provincial meeting at Wyong for our BJ Howes Race Day, showcasing some progressive horses.

Joe Pride is plotting an Oaks path with Lekvarte, while Stephen Jones’ Una Grew Roses was impressive on debut.

It wasn’t the ideal start to William Pike’s NSW stint, the legendary WA hoop unsuccessful in a protest in the 1100m 3YO Maiden.

Pike attempted a rails run in the straight and was bumped by Fielding, ridden by Digger McLellan, the pair finishing second and third.

They fought it out in the steward’s room with the appeal eventually dismissed.

Allan Kehoe struck a blow for locals with his tough gelding Lord Heron continuing a great first up record.

There was plenty of praise for the track from both trainers and jockeys, the hard work of Phil Robinson and his team paying off.

Annabel Neasham pulled the right rein with Bessmati, the Fastnet Rock filly breaking through for her first win in impressive style.
Neasham had originally nominated two fillies for the race, Bessmati and Mumbai Jewel.

She opted to run the latter at Randwick on Saturday and got the job done, leaving the stablemate to claim the honours at Wyong.

Chad Schofield gave Bessmati a great ride just behind the leader, hitting the front on straightening and holding out the race favourite Victorine on the line.

Bessmati ($3.70) was having her third career start, coming off an unplaced run in the 1000m Listed Lohnro Stakes at Randwick on February 5.

Schofield, who partnered her that day, she said appreciated the extra distance at Wyong.

“She drew a little awkward but jumped really well today. There was very little tempo, so I was able to cruise across. She relaxed well and was strong to the line.

“She hit the front early in the straight and when she felt the other horse challenging her, she had something to give.”

The well supported Godolphin $1.90 favourite Victorine finished a length behind the winner, with Really Motivated ($41) trained by Warren Gavenlock, was more than four lengths behind in third.

Trainer Stephen Jones had been very confident leading into the race, after the four-year-old by Swiss Ace was dominant in her two trials.

“I thought she’d be hard to beat and that’s how it went,” Jones said. “She’s big and fresh and will improve off that, she goes good.”

“She’s a big strong filly and I think she’s a Highway type horse and might go on from there.”

“She’s got a beautiful action and it was a lovely win,” Collett said.

The winner was sent out at $6 and beat the Craig Carmody trained Latin Lyric ($2.05fav), who grew wings in the final stages to come from the rear of the field and won’t be far off a win.

A great training performance by James Cummings with Camino Real a dominant winner after a year off the scene.

The Shamardal filly has been a work in progress for the trainer, after first stepping out at Randwick in October 2020.

She resumed from a spell in February last year and was placed fourth at Provincial and Metro starts, before issues forced her back to the paddock.

Darren Beadman representing the stable, paid tribute to the vets.

“The vets at Osborne Park have done a great job bringing this filly back to form and racing style,” he said. “She’s had a lot of issues with temperatures and a foot abscess, and they were able to get on top of all that.

“She’s always shown good natural ability but structurally and mentally she wasn’t there. She was very impressive today and has blossomed into a nice filly.”

The $2.40 favourite Camino Real, was coming off two strong trials at Rosehill and Hawkesbury.

It was an interesting Wyong debut for William Pike, the former WA hoop lodging a protest against the second placed Fielding ($3.40), after he finished third on the Snowden trained Choix De La Mer ($6.50).

Damien Lane’s gelding and Pike’s mount bumped as he was attempting a split along the rails in the straight. The protest was dismissed.

Gary Moore’s Sing A Love Song could be headed for a stakes race over the Sydney carnival after breaking through at start 10.

The Your Song colt had the best form going into the race and Keagan Latham gave him a gun ride that helped secure his first win.

The $220,000 Magic Millions yearling had been placed on four occasions in his previous nine starts including a second in the Group 3 Canonbury Stakes, the latest a second on the Kensington track on February 2.

He had finished not far behind the winner in the $250,000 Magic Millions Maiden on the Gold Coast in January, strong form that saw him sent out $2.60 favourite.

Moore was ecstatic with the win.

“Hopefully he can go on to something a bit better after this and we can look for a stakes race at the back end of the carnival. He was too good for his opposition today and a deserved winner. “

Latham had settled the colt midfield early, one off the fence, before sprinting around the field on the turn and pulling away in the straight.

He beat the Waller trained Ultimate Pride ($6) who isn’t far off a win, with Wolfburn ($8) from the Baker stable third.

Lekvarte is giving her trainer every confidence to head towards the ATC Oaks after an eye-catching Wyong win.

The NZ bred daughter of Reliable Man put paid to her opposition in impressive style, with Jay Ford coming from last on the turn to hit the front on straightening and drawing away in the final stages.

She put more than three lengths on Travelling Kate ($8) from the Widdup yard, with Snowden’s Miskha Magic ($12) third.

“That’s the way they’ve got to win if you’re heading toward a race like the Oaks,” Pride said. “I’ve always had a good opinion of her. The win over the mile at Newcastle before the spell gave her confidence and it’s exciting to see her do that today.

“She’s a beautiful filly and I’m looking forward to setting her on the Oaks path. She’s very exciting.”

The Snowden trained Native Rock defied a significant betting drift to bring up his second win at start 10.

The four-year-old by Wandjina was sent out at $8.50 after the Godolphin trained Translation firmed into $3.70 favourite.

A $55,000 Inglis yearling, Native Rock appreciated both the track conditions and distance at Wyong, with a good ride by Tommy Berry another contributing factor.

“We learned something new the other day that he doesn’t like any give in the ground and the track suited him perfectly today,” stable representative Colm McCulloch said. “He had a good draw and Tommy gave him a good cart into the race. He relaxed well behind the speed and when Tommy popped off their backs, he put them to bed well.

“He’s filled out into a lovely animal and Peter and Paul have done a great job with him.”

Berry said there was still improvement in Native Rock, who would be ideally suited to 1000m races around the Provincials.

Allan Kehoe’s Barney Rabble ($9) put in another good performance finishing second, while Translation appeared to have every chance and could be looking for further.

Local galloper Lord Heron maintained his terrific first up record upsetting some of the more favourite runners to bring up his sixth career win.

The Allan Kehoe trained seven-year-old was coming off a strong Newcastle trial win on January 24 over Kristen Buchanan’s Delexo but was friendless with punters.

He was given a super ride by Jason Collett who positioned him just outside the leader.

Lord Heron ($15) hit the front on straightening and was able to hold out the fast-finishing Rumpshaker ($7.50), with the rank outsider Spin Bowles ($41) third.

“He’s got terrific first up form and makes my job easy when he puts himself up on the speed and has a decent fight,” Collett said.

“He did a bit of work early and put a bit of pressure on the leader. I used this to his benefit, and it paid off. Nice win.”

Raced by Kehoe and his partner Kim, Lord Heron was having his 24th career start. He has had three wins and a placing from six first up starts.

Tom Sherry claims top points in the Rising Star Series riding Amortal to victory in the Wyong heat of the apprentice’s series.

Mark Newnham’s Written Tycoon four-year-old looks to have a bright future, the Wyong win his second from just three starts.

Sherry rated Amortal well, settling him behind the early leader First Peoples. The pair battled in the early part of the straight before Amortal kicked away to score by two lengths.

“It was a very good win and he’s on the way to better races,” Aaron Day, representing the stable said. “He put them away easy today and had a bit in hand.”