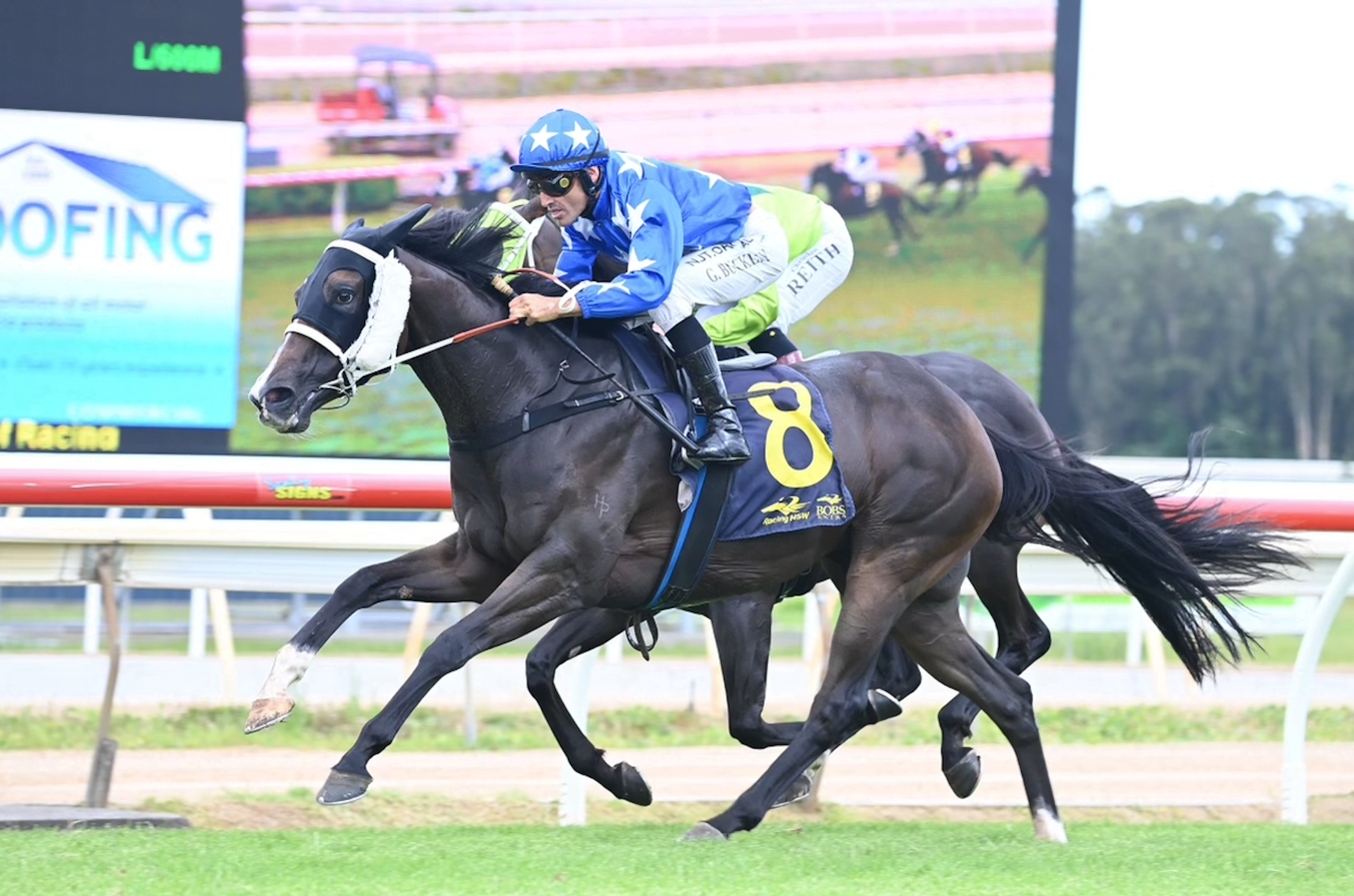 IT was a case of “crash and burn” for punters who pinned their faith in three Annabel Neasham fancies – two favourites and a close second favourite.

Tick Tock Boom finished third in the opener, Regal Pom fourth in the second, and Forever You was third in the fifth race.

Whilst the latter pair didn’t justify their favourite tags this time, it might be a different story once they get on to a bigger circuit.

Both got too far out of their ground and did well to finish as close as they did.

The seven races were shared by individual trainers, and jockey Grant Buckley took the riding honours with a double, scoring on Barellan Bandit ($4.40) and Leave Me Some.

Both have the ability to make their mark in midweek company in town in the coming weeks.

Course manager Phil Robinson and his staff earned deserved plaudits for the manner in which the track was presented. From a “Heavy 9” starting point, the track was upgraded to a “Heavy 8” and then “Soft 6”.

THE meeting began on a “Heavy 9” surface following overnight rain, and one of Sydney’s leading stables, Gerald Ryan and Sterling Alexiou, continued its momentum of late by scoring with MIHOCEK ($5).

Cleverly ridden by Matthew Palmer, who renewed an earlier association with the former during a previous NSW stint. Palmer ensured he was right up on the speed when the pace wasn’t strong, and the three-year-old son of Sooboog and$80,000 2020 yearling sale purchase, took the lead on straightening and held out Bon Vivant ($4.80) and Tick Tock Boom ($2.90). Just behind the placegetters at his previous two runs since resuming at Rosehill Gardens and Newcastle when he settled back in the field in both, MIHOCEK had an important gear change with the addition of a lugging bit. The $2.70 favourite Bob was never a hope and beat only the $31 outsider Apex home in the small field of six. Stewards reported no abnormality was found with BOB afterwards, but will check on his condition in the coming days.

RACING NSW stewards upgraded the track to a “Heavy 8” retrospectively to include the opener, and leading Sydney trainer Chris Waller and jockey Lee Magorrian struck with topweight TUHINGA ($5).

Having only his fifth start, the three-year-old son of Epaulette broke through after racing up on the speed.  Stable spokesperson Clare Heuston, last season’s Strapper Of The Year, paid credit to Magorrian for his ride.

“Tuhinga expended too much energy last start at Newcastle when he started to pull,” she said. “The heavier track today may have helped, but Lee got him to settle and he was able to finish the race off.”

Whilst TUHINGA ticked the heavy track box, his rider still considered he is better suited on top of the ground.

TUHGINA beat $41 roughie Nullify and $1.75 favourite Regal Pom, who got well out of his ground. His apprentice rider Ellen Hennessy was questioned by stewards, and told them she had intended to lead or settle just behind the leaders. When Regal Pom bounded on jumping and lost ground, she immediately placed him under pressure, but he did not quicken sufficiently and was crossed, and as a result settled near the tail of the field. In the circumstances, he did a superb job to snatch a minor placing on the post.

A further upgrade to include this race resulted in the track being lifted to a “Soft 6”. Hawkesbury trainer Edward Cummings claimed his eighth winner this season and 26th overall when ITALIAN INFORMANT ($6-50), ridden by Dylan Gibbons, upset local Damien Lane stablemates, the well-backed $2.90 favourite Fielding and $31 roughie Stays On Tour.

ITALIAN INFORMANT, a three-year-old son of Spill The Beans, who died prematurely after beginning his stud career, has been a work in progress, according to his trainer. ITALIAN INFORMANT reared as the start at Hawkesbury on December 16, dislodged rider Brodie Loy and took no part in the race.

“He lost only a bit of bark from a back leg, and had to trial five days later at Canterbury by order of stewards,” Cummings said. “It was good to see him break through today, and hopefully that will give him the confidence to go on with things now.”

Runner-up Fielding was excellent on debut. He raced wide from an awkward draw before taking over on straightening, and not surprisingly wasn’t able to withstand the winner’s burst at the end. He has had his quirks as well and will take improvement from his raced ay debut. Stewards will follow up on stable plans for two-year-old Mr Putin ($3.80), who was never in contention and tailed the field home.

ALL’S well that ends well! Scone trainer John Ramsey had planned to run BARELLAN BANDIT at Warwick Farm last Wednesday, but the gelding was second emergency and missed out on a start in the Benchmark 72 Handicap (2200m).

Wyong became the next best option, and it was worth the few days’ wait. Grant Buckley, booked to ride the progressive five-year-old in Sydney, stayed with him and gave him a perfect ride to score easily. BARELLAN BANDIT ($4.40) was strong to the line to defeat Miss Delia ($4.20) and $3.10 favourite Reposition, who ran another honest race. It was obvious on the home turn that the first two were beginning sweeping runs and would fight out the finish, though BARELLAN BANDIT won with a good bit in hand. The winner has won three of his last four races and hasn’t missed a place at his last six starts.  Ramsey is keen to give the gelding his chance in town in a midweek race when he can secure a start. Buckley rode him in his previous 1600m Tamworth victory and was again impressed today.

“I wanted to ride him patiently going to 2100m as he showed a good turn of foot at Tamworth,” he said. “I knew he would do that again today if I rode him quietly, and he was impressive again. I had a good young jockey to follow in Dylan Gibbons, who carted me into the race on the runner-up.”

Miss Delia wasn’t disgraced, and fourth placegetter Lava perhaps is worth another chance. He drew the outside barrier and was forced to race deep before getting into second place outside the leader Alastor in the back straight. Stewards fined Lava’s rider Lee Magorrian $400 for using the whip 10 times (five more than permitted) before the 100m.

IN a desperately tight finish, PREFECT MATCH ($11) broke through at his fourth start – and trainer Gary Moore was quick to heap praise on winning rider Keagan Latham. “I have to congratulate Keagan; he gave him a great ride,” Moore said. “This horse has taken a while to hit his straps and is still slightly immature, but I feel he has a bright future.

“I will chat with Keagan and get his opinion, but probably step him up now over a little bit further.”

The now three-year-old son of Brazen Beau was a $400,000 yearling buy at the Gold Coast in 2020. PREFECT MATCH trialled twice last winter for another stable, but did not race before finding his way to Moore’s Rosehill yard. In hanging on grimly, PREFECT MATCH robbed fellow Rosehill trainers Ryan and Alexiou of a double, as they were represented by runner-up Circling ($5.50).

Punters again burnt their fingers for the third time on an Annabel Neasham runner. Her representative Forever You ($2.80fav) was third and, though beaten, can atone on a bigger track. She got too far back and was the widest runner in the straight, making up many lengths in the closing stages. A staying-bred mare, Forever You is likely to atone shortly.

The two Grant’s – trainer Marshall and jockey Buckley – combined to get LEAVE ME SOME back in the winning list. Buckley astutely recalled he had ridden the mare only once previously in one of the early Midway Handicaps in Sydney last July when she came from well back to finish fourth to Lord Zoulander over 1200m.

“I remembered she had to be ridden quietly because she really hit the line that day,” Buckley said. “She did a good job to win today.” B

Buckley also praised the track staff at Wyong, saying he was worried when he arrived at the course, and it was a Heavy 9 rating.

“Full credit to them, the track has kept improving all day,” he said.

Winning trainer Marshall was understandably delighted to secure Buckley’s services. “Grant has been on her twice now and given her 10 out of 10 rides both times,” he said. “LEAVE ME SOME has been great for our stable; she was a cheap mare and has won six races.”

LEAVE ME SOME ($3.40fav) finished strongly in the centre of the track to lead home a Newcastle quinella, overpowering David Atkins’ Two Up ($7.50) in the closing stages. Marshall opted to take visors off his mare for today’s assignment and instead put winkers on her. Third placegetter Rumpshaker ($21) began awkwardly and bumped the winner, then raced wide and without cover throughout. Da Nang Star ($6) finished sixth, and afterwards was found to be suffering from heat stress. Stewards adjourned the matter until they can interview trainer Bjorn Baker.

PUNTERS had to wait until the last two races to recoup earlier losses and at least went home with something in their pockets when well-backed odds-on pop AIR OF ALSACE ($1.75), trained by Jason Coyle, proved up to the task.

Jockey Mitchell Bell picked up a late booking when Jess Taylor was unavailable to take the mount and didn’t let the opportunity slip. He had the lightly raced Contributer mare in second place soon after the start, and she responded gamely in the straight to defeat Hit The High Note ($6) and Tornado Light ($7). This was her second success from her last three starts, with a Newcastle placing on the Beaumont track sandwiched between.

There were excuses for Lucilight (fourth as $5 second favourite). She began awkwardly and lost two lengths, then over the concluding stages could not be fully tested when awkwardly positioned on the heels of the winner, who shifted in slightly. Lucilight was beaten less than one and a half lengths.