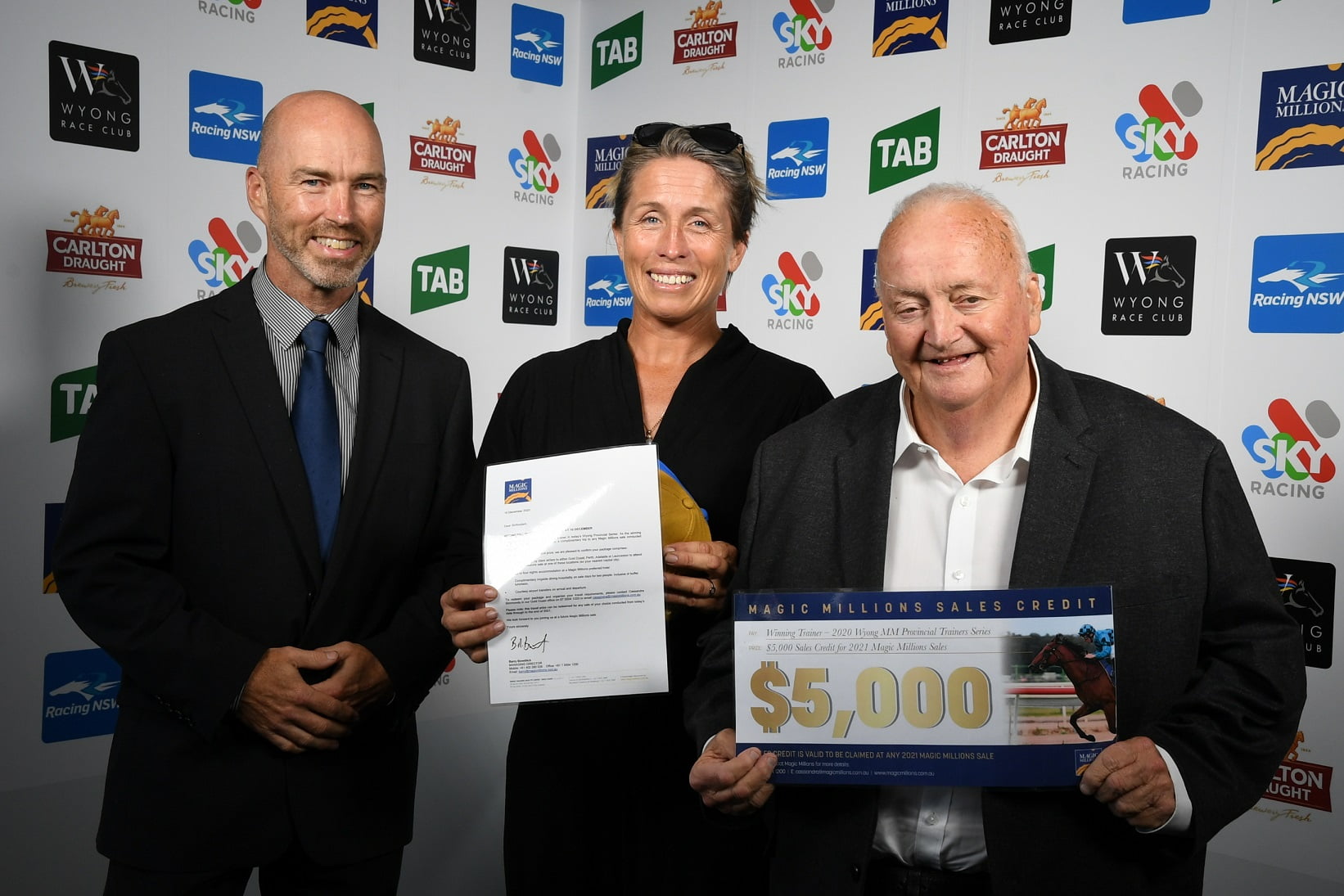 The Dreamscape mare brought up her fifth career win in the FULTONS FLYING FETLOCKS BENCHMARK 64 over1600 metres, with Mikayla Weir in the saddle.

The race carried double points in the Magic Millions Series, and with Buchanan already on two points from an earlier meeting, she scooped the pool taking out both the round and overall title.

She received flights, transfers and accommodation to the MM Sale of choice for being the leading Provincial trainer on the day and took home at $5000 MM Sales credit for winning the series.

“It’s just fabulous. I’m excited about the prize and I’m excited for Margie Bee. This win over the 1600m adds a whole new dimension to her going forward,” Buchanan said.

“It is so good for Magic Millions and the Wyong club to put on this series for Provincial trainers.

“It’s a fantastic prize and I got in at the last minute.”

Margie Bee qualified for the Sky Racing Summer Provincial Series with a second in the Wyong heat over 1350m on November 26.

Buchanan was unsure if the five-year-old would run out the 1600m, the distance of the final, to be run at Wyong on January 2.

“She’s very tough and she’s very smart and she knows her home track and where the finishing track is. I thought if the race was run that way, she was good chance.

“In previous preparations I would never have dreamt she would get to the mile. I have the Provincial Series to thank for pushing my hand.

“I thought we’d test her out over the 1600m, and it happened to be the MM double points race, so it all worked out.

“It was a beautiful, well-judged ride by Mikayla, she just gave her a cuddle in the run and that’s the key to her.”

Coming off the second at Wyong last start, Margie Bee earned good late support and was sent out at $3.40.

The five-year-old led throughout drawing away on the line to win by almost two lengths.

She beat the $3.30 favourite Shamani, from the Freedman stable, with Austreet ($31) trained by Jarrod Austin, third.

Buchanan said she would likely trial Margie Bee prior to the January 2 final.

Stoltz looks to be a horse with a future after bringing up back to back Wyong wins.

The More Than Ready gelding broke his maiden at Wyong on November 26 and followed that up with a strong win in the 1200m FIRE & GENERAL CLASS 1.

The victory brought up a double for Tommy Berry, who has partnered the three-year-old in both his wins.

Berry led throughout on Stoltz ($5) and was dominant to the line, recording a length win.

Up and coming trainer Annabel Neasham has a good opinion of Stoltz, a $200,000 Magic Millions yearling.

“I was really impressed with the win today,” she said.

“Prior to the race I thought it mapped like there was going to be too much speed for him to get in a forward spot, but he rocketed out of the gates.

“Tommy just used his initiative and got to the rails, he got a few cheap sectionals mid-race and then kicked away and was too good.

“That’s why you put people like Tommy on because when things don’t map like you think, they can still put them in the right spot.”

“I’ll see how he comes through. I’d like to find a race for him at the Magic Millions, but he’ll go to a mid-week from here.”

Trained by Peter and Paul Snowden and ridden by Adrian Layt, the mare has greeted the judge at all three starts since a freshen up in September.

She posted a Wyong victory on November 7, followed up with a Kembla win on November 28, completing the treble with her second Wyong win.

Layt, who has partnered Miss Dior in all three wins, settled her just behind the leader before hitting the front in the straight and drawing away to win by a long neck.

She beat the $2.90 race favourite Able Hill, trained by Bjorn Baker, with Star Harada ($21) from the Wendy Roache stable, more than two lengths behind in third.

“Peter and Paul always knew she had ability, but it’s taken her a while to put things together.

“She has really turned the corner now and hopefully she can go on with it.”

The five-year-old was given a patient ride by Rachel King, before drawing away in the straight.

It was his first victory for trainer Bjorn Baker, his other win recorded at Tipperary, Ireland in June 2019.

He went on to be placed sixth in a Group 2 at Ascot and was subsequently seventh in a Group 1 before coming to Australia.

He has been in consistent form since joining the Baker stable and was coming off a second at Canterbury on November 27.

He was sent out $1.16 favourite and beat Bulwark ($20) trained by Robert and Luke Price by three and a half lengths, with Zoomerango ($31) from the Perry stable third.

The son of Galileo looks set to win more races on the back of his impressive victory.

A thrilling finish to the SICAME AUSTRALIA MAIDEN between the two favourites before Resilient Star grabbed victory on the line.

The More Than Ready gelding, was having his fourth start, with a previous second at Gosford and a fourth at Warwick Farm.

The Freedman trained three-year-old was ridden by Tommy Berry, who continued a great run at Wyong, after posting four winners at the previous meeting.

Berry settled Resilient Star ($2.90) toward the rear of the small field in the 1350m race, winding him up on the turn.

He drew level with Saint Of Katowice ($2.80fav) halfway down the straight but ran out twice before Berry was able to straighten him just before the line.

“I thought he’d got beat,” a relieved Richard Freedman said after the race.

“It’s a tricky angle but he got in by the skin of his teeth.

“He is just about at the end of his preparation. I’ll speak to Michael (Freedman) and I’d say he will most probably spell.

“He’s running about and has got a few things to learn but he’s knocked off his maiden now.”

Freedman said the Vinery bred Resilient Star has a lot of growing to do and will be a better horse as he gets older.

Just A Jedi ($12) from the Ryan/Alexiou stable, was almost two lengths behind in third.

The Excelebration gelding, having only his second start for the Doyle stable, was ridden by Koby Jennings.

He settled the four-year-old toward the rear in the early stages, bringing him to the rails on straightening.

He was able to hold out Mark Newnham’s fast finishing Prince Six ($11) and Desert Flame ($7) from the Payne stable, to win by half a length.

“I think he’s a progressive horse and it’s good to see him win today,” Doyle said.

“He will improve over the staying trips and was second up over the mile today.

“I always thought he was a blinkers horse and he pulled up at the line today.

“He definitely needs them. He should have won a bit more comfortably but just wanted to stop when he got in front.

“I think he will run at least 2000m, perhaps a bit further if he relaxes well.

“He’s shown us at home that he seems to want a trip, but we’ll step him up slowly and let him tell us.”

Doyle said Teronito was their first winner for owner Superhorse.

“We’ve had about four runners for them, and he is our first win,” Doyle said.

Teronito had previously been trained by Gwenda Markwell, where he was placed twice at Kembla Grange.

He was second at Muswellbrook in his first start for the Doyle stable, over 1280m on November 27, and went one better at Wyong.

Despite running wide on the turn, Josh Parr was able to take hold of the Exceed and Excel gelding, who went to the line more than two lengths ahead of his rivals.

French Bonnet had a hard luck tale after losing considerable ground mid-race when she brushed the rial and put in an eye-catching finish.

The winner, a $300,000 Inglis yearling, was having his fifth race start, having been narrowly beaten at Wyong over the same distance on November 18.

He had previously posted two seconds and a third from four starts, the three placings all on provincial tracks.

Bred and raced by Domeland, That’s Better could be headed for bigger things, on the strength of the win in strong maiden company.