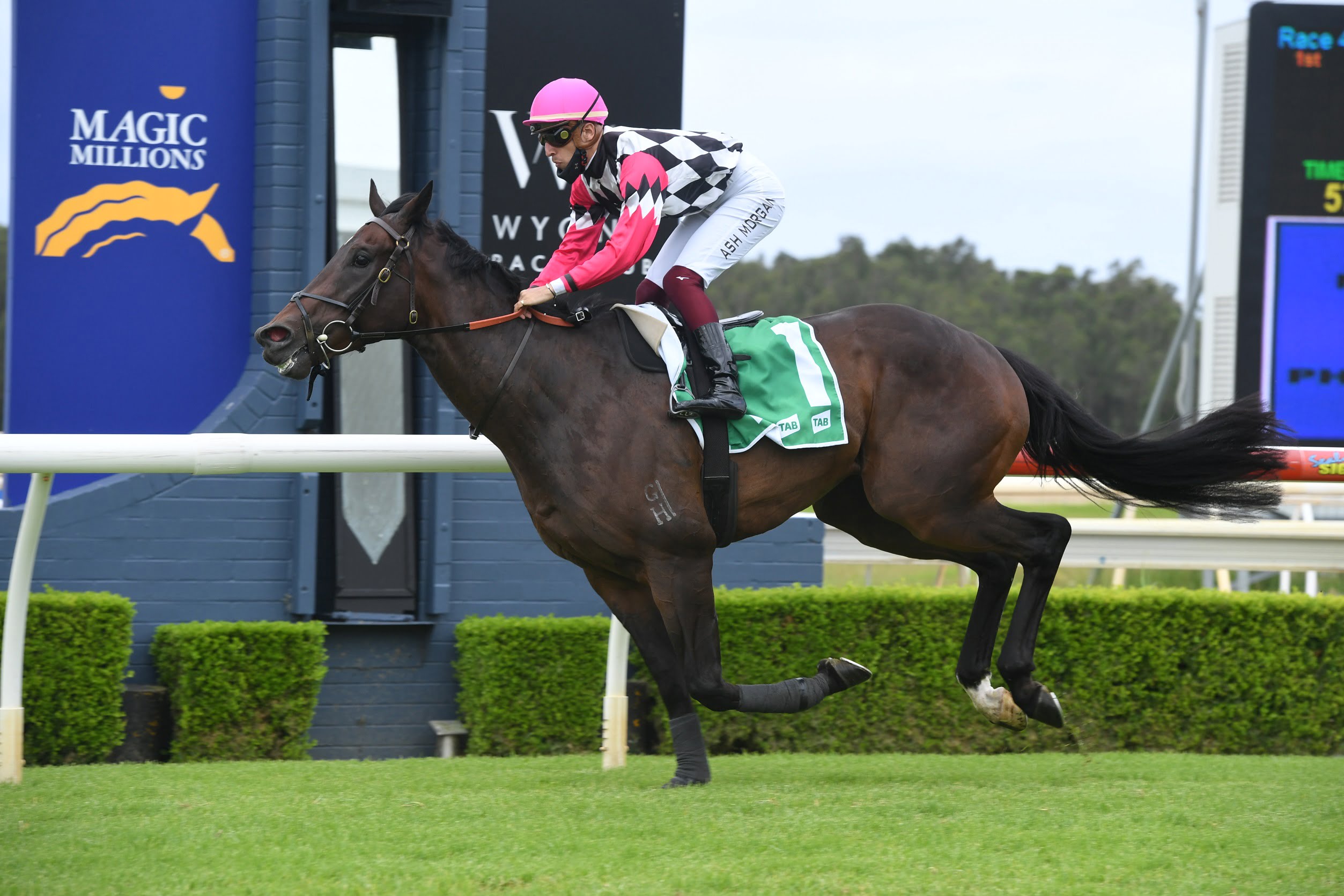 Kristen Buchanan looks to have unveiled a promising galloper with Delexo blitzing his opposition on debut.

The three-year-old was sent out $2.35 favourite and didn’t disappoint, taking out the MARK CROSS RACING 2&3YO PROV & CTRY MAIDEN by almost three lengths.

Ridden by Ashley Morgan, Delexo raced fiercely at times but still had the ability to finish off the 1000m race in convincing fashion.

“I do like this bloke,” Buchanan said following the win.

“I was nervous about today but he’s a really, lovely animal.

“He was fierce in the early stages and has to learn to cool his jets a little but over the 1000m he’s got some good jets.

“He has a very competitive mind set on game day and you can’t complain about that in a racehorse.”

Buchanan said she had purchased Delexo at the breeze up sales on the Gold Coast.

“He was a standout in terms of heart rate and recovery and that really drew my attention plus he was a cracking sort as well.

“He had a few little issues and because of that we got him at a reasonable price.

“I was prepared to be patient, but he got here a little earlier than I expected and it’s great to see him win like that.

“He’s a beautiful strong horse and a favourite in the stables.”

Snitzify denied local warrior Isorich victory in the HAPPY RETIREMENT WYONG TRAINER STAN THOMAS CONDITIONAL BENCHMARK 68, getting the bob of the head on the line.

Apprentice Reece Jones took the 10-year-old veteran to the lead and kicked away in the straight, only to be run down in the final stages by Snitzify.

The winner, a $105,000 yearling, is trained by Peter and Paul Snowden for Triple Crown syndications.

Racing manager Colum McCullagh was full of praise for the ride by Keagan Latham.

“Keagan slid across and got him in a nice spot just outside the lead.

“It was nice to see him knuckle down and try really hard in the straight,” he said.

“We were counting steps in the end for Isorich to stop but luckily for us and a great bunch of Triple Crown owners, Snitzify was able to stretch out and get his nose on the right side of the post.”

Snitzify ($3.40) beat the Wayne Seelin trained Isorich ($21), with the $3 favourite Debari, from the Pride stable, third.

Patience paid off for the connections of Blue Sky Moon, with the first starter taking out the 1200m KIM WAUGH RACING 4YO&UP MAIDEN.

The four-year-old, by Irish Sire Puissance De Lune, had been trialled twice in the lead up by trainer Paul Cave.

He looked sharp winning his latest trial over 740m at Warwick Farm on December 30 and carried that form into the race.

The gelding pinged the gates, enabling Kathy O’Hara to dictate terms in front.

Courtesy of a well-rated ride, she was able to hold out the short priced favourite Doppelpunkt in the final stages, to win by half a neck.

“He’s a lovely horse and is still pretty raw,” O’Hara said after the win.

“He’s a big, scopey horse who will improve with time and racing.

“The owners have taken their time with him and hopefully they will be rewarded.

“It’s all before him at the moment and he will take a lot of benefit out of today.”

The formidable combination of Tim Clark and Waterhouse/Bott struck again in the KRISTEN BUCHANAN RACING CG&E MAIDEN with Anotherthinkcomin’ a dominant winner.

The three-year-old, a $210,000 Vancouver yearling, was coming off a ninth on debut at Bathurst on December 21, but made the step up to Provincial grade impressively, recording a four-length win.

Clark took the gelding to the lead in the 1350m race, and maintained the front, kicking away in the final stages.

“He didn’t have a whole lot of luck at Bathurst last start. It was a bit short and he got caught out in the middle of no man’s land and just had a tough run. “He trained on from that and cleaned up in the coat and was looking a lot better.”

Anotherthinkcomin’ beat the short priced favourite Kaptive ($1.40) from the Hawkes stable, who was held up on the turn, with Apex ($31) trained by John Cooper, third.

The well-supported Correlate overcame a wide barrier to score a tough win in the 1350m TRACEY BARTLEY RACING F&M MAIDEN.

Josh Parr was able to take the Not A Single Doubt filly to a soft lead from barrier nine after a positive ride from the gates.

He dictated terms in front, giving the filly a breather in the back straight, before drawing away in the final stages to win by more than a length.

Aaron Lau, representing the Newnham stable, said Correlate had gone into the race with plenty of fitness.

“She was third up today and was fit enough to win like that,” he said.

“The original plan was to sit outside the leader, but she got into a lovely rhythm and was way too strong.

“She got a stitch over in the last 100m at Newcastle last start but was very good today.”

Correlate, who had been placed once from five starts, earned plenty of late support to start $2.40 favourite.

She beat the Snowden trained Danzette ($7.50), with Princess Amira ($8.50) from the Waterhouse/Bott stable, third.

It was back-to-back Wyong wins for the Kylie Gavenlock trained Go For Gold taking out the 1100m ALLAN DENHAM CLASS 1.

The five-year-old by Medaglia D’Oro had to survive a protest by runner-up Cinderella after being wayward in the final stages of the straight.

He kept his winning record intact in his second start since joining the Gavenlock stable, recording a half length win.

Andrew Gibbons had Go For Gold just behind the leaders, before circling the field on the turn and hitting the front in the straight.

Gavenlock described the winner as a work in progress.

“He’s a really quiet, beautiful animal but it’s a psychological thing for him,” she said.

“He had bad barrier manners when he came to us. He collapsed at Gosford after his second start and since then his manners got worse.

“We had to go right back and get it all out of his head and take him to the races and give him nice experiences.

“It seems to be paying off but it’s still pretty nerve wracking waiting for him to get into the gates.

“He’s very versatile and a fair dinkum racehorse but we still have to keep working on his manners.”

Go For Gold ($14) beat Cinderella ($17), trained by Richard and Michael Freedman, with Colonel ($5) from the Snowden stable, third.

The Written Tycoon three-year-old, a $130,000 yearling, was a Canterbury winner two starts back and struggled in the heavy at his last outing on the Kensington track.

Apprentice Tyler Schiller claimed a heat of the Rising Star Series with the victory along with the praise of trainer Gerald Ryan.

“He is a nice horse and Tyler rode him terrific,” Ryan said.

“He can be a difficult horse to ride, over racing and pulling.

“Tim Clark spoke to Tyler and said to just flow with him, and he would do what he did today, come back off the bit and travel.

“I’ve always had an opinion of him, but he’s been his own worst enemy but he’s starting to learn his craft.”