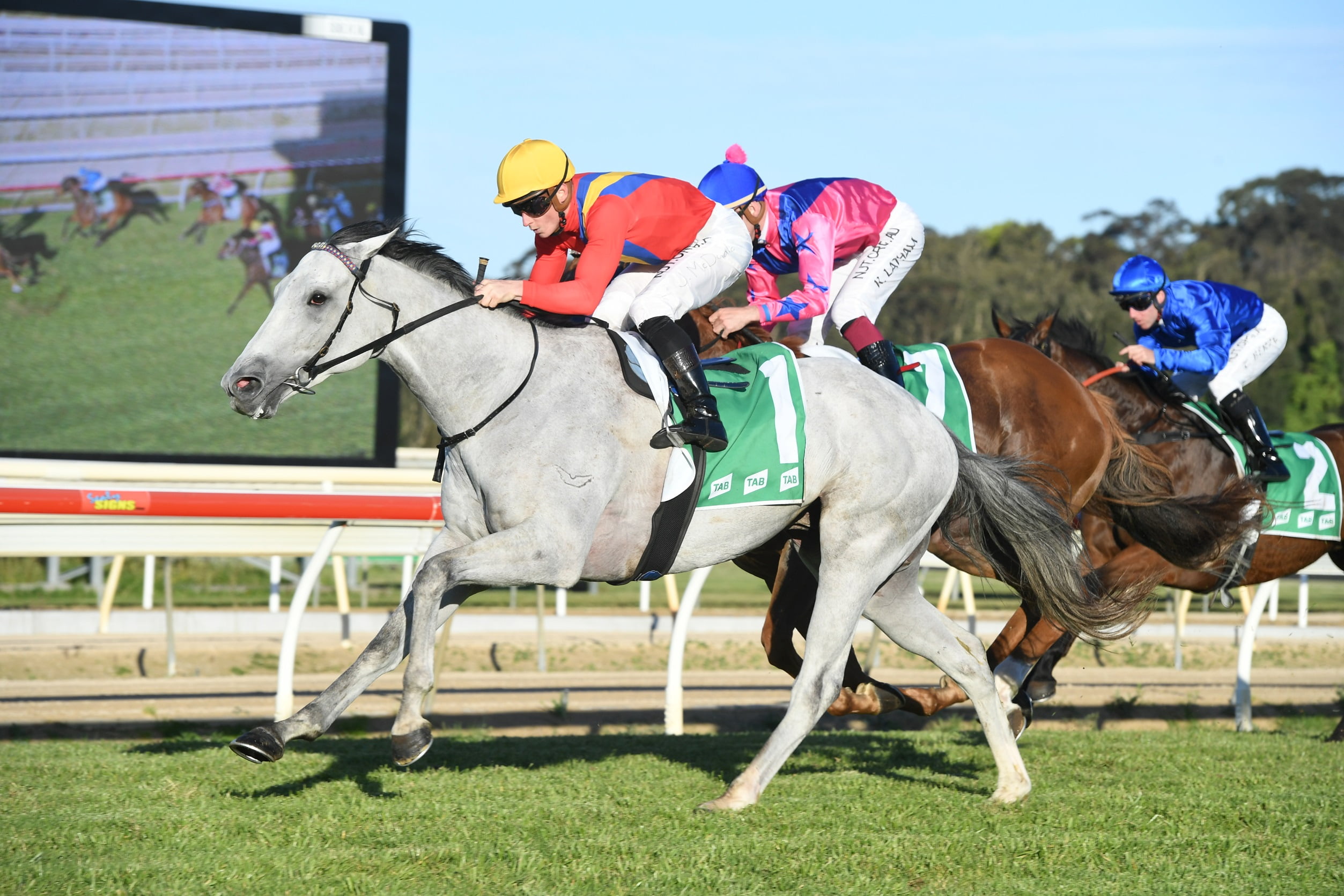 Kim Waugh admitted to a few nervous moments before her classy galloper Bethencourt strode to victory on his home track to bring up his second career win.

The flashy grey was green in the final stages, shifting in sharply when James McDonald pulled the stick in the straight before knuckling down to score a dominant win.

Bethencourt had to overcome a wide barrier and settled back further than expected, but still managed to greet the judge in the MAGIC MILLIONS 2YO’S IN TRAINING SALE – 10TH NOV – GOLD COAST BENCHMARK 64 over 1350m.

“You don’t want to know what I was thinking,” Waugh laughed after the win.

“We drew very wide and didn’t have the greatest option there.

“He is still so new. He was a bit lost and back further than we expected.

“The pace was on and down the straight he was all over the place but he’s a nice horse. I’m really excited to see what he can do when the penny drops.”

Waugh said McDonald had been keen to stick with the Puissance De Lune gelding.

“James was excited about coming here to ride him today. He loves him.”

She said she expected Bethencourt will get over more ground.

“I’m definitely looking forward to him getting up to a mile and even 2000m.

“He’s always shown a lot of promise and has very good ability but he’s immature still.

“When you’ve got a good opinion of a horse you’ve got to nurse them through.”

Bethencourt was sent out $1.90 favourite on the strength of his last start second at Kembla over 1200m.

The win brought up a double for McDonald, having tasted success with Nyami earlier on the program.

It also secured Waugh the first round of our Magic Millions Provincial Trainers Series with Bethencourt scoring double points, six, with the win.

A typical front running ride by Tim Clark set up the ELECTRA CABLES 4YO&UP MAIDEN for the Waterhouse/Bott trained Alumna.

Clark took the $2 race favourite to an early lead in the 1600m race, dictating terms in the small field.

He kicked away on the turn and was able to cling on in the final stages to win by a long neck.

Neil Paine, representing the stable, said it was a typical performance by one of their runners.

“It was never in doubt,” he said. “I love these Tulloch Lodge horses once they get up over a mile. Once our horses get up over a distance, they are so strong, and they put themselves in a race.

“That’s the way Gai and Adrian love to train them, put them right on the speed if not lead, it was just terrific today.”

Paine said Clark had given the Shooting to Win mare an easy run in front.

“From the 600m Tim picked up the pace, put a couple on them on the turn and that was enough to hold on.

“You get paid whether you win by a head or three lengths. It is great for the Bott’s they’ll be very happy.”

Alumna, who was having her third race start, is raced by Evergreen Stud, headed by Adrian Bott’s father Tony.

She beat Microna ($8.50) trained by John Steinmetz, with Oconee ($6) from the Waller stable third.

James McDonald piloted the race favourite Nyami to victory in the HANECO LIGHTING MAIDEN over 1350m.

The Charm Spirit gelding, a $120,000 New Zealand bred yearling, was having his third career start.

He finished second over 1400m on the Kensington track on January 1, before being spelled, having debuted with a third at Canterbury over 1200m.

The four-year-old looked good in a subsequent trial at Warwick Farm on September 3 giving punters the confidence to send him out favourite.

From the wide barrier, McDonald crossed and settled just outside the second favourite Write On.

He took a slender lead on straightening before kicking clear in the final stages to win by a length and a half.

A tough win by Godolphin filly The Graces who repaid punters for their confidence taking out the SUNNY LIGHTING F&M MAIDEN over 1200m.

The well-bred Exceed and Excel filly, a full sister to stablemate Aquitane, was coming off a last start third at Kembla over 1000m.

Having her fourth career start she enjoyed plenty of late support and was sent out $3.60 favourite.

Jason Collett was caught four-wide in the early stages from the wide draw, with the filly having to work hard throughout.

Her class showed through in the final stages with the three-year-old scoring by a half-length.

Darren Beadman, representing the stable, said it was a very strong win by the filly.

“She certainly toughed it out,” he said. “She definitely burnt the candle at both ends and mid race as well. It was a very strong win.

“She had a good foundation for this race today. She has been a real work in progress through her early racing career, so its credit to the staff who got her in the right groove.

“She was able to get into a nice rhythm today unlike first up when she over-raced. “Jason has lovely hands, balance and good timing. He really suits a horse like this and full credit to him.”

A double to the Waller stable after El Buena put in a sustained run in the straight to nab victory in the final stages of the 1200m BRILLIANT LIGHTING CG&E MAIDEN.

The Chris Waller trained gelding continued a winning run for favourites coming from behind to score a narrow half neck win.

The in-form Tommy Berry had settled the Rubick gelding toward the rear of the field, peeling wide on straightening.

He made up many lengths in the straight to overhaul the Brad Widdup trained Mix ($5), with Prince Invincible ($6), from the O’Shea stable, a head behind in third.

After finishing second at Kensington in his first preparation, he resumed at Wyong on August 30 but was unplaced over the 1200m.

The Manhattan Rain mare was having her first start over the longer distance and Coyle is confident there are more wins to come.

“It was a really good win today,” he said. “She finished off her last preparation with a strong win over 1850m and the plan was always to test over the 2100m.

“It was a nice quite ride by Louise and she was strong late.

“She’s a horse now that we can step over these distances and I think she’s got a few more wins in her.”

Coyle said there were excuses for the five-year-old in her last run at Newcastle when she finished toward the rear of the field.

“I’m sure Jason Collett won’t shy away from saying it wasn’t one of his best rides. The way the race was run she generally had no chance and obviously performed well today.”

Day settled Lunar Rain at the rear, before circling the field on straightening and running strongly to the line.

She beat the Kylie Gavenlock trained Dundee ($10), with Avalene ($7), from the Justin Bowen stable, third.

The Foxwedge gelding is putting together a good record, with three wins and two placings from seven starts.

Parr settled the five-year-old just off the pace in the 1600m race and hit the front on straightening.

He drew away in the straight and managed to hold out the fast finishing Mo’s Glory ($9) trained by Rod Northam and the Perry trained Nothing Too Hard ($5) to win by a half head.

“He’s only been in the right race about four times and won three of them,” he said.

“He’s genuine and I think the way the race was run today he had to cart them up to them and tough it out late.

“There were definitely excuses at Tuncurry last start,” he said.

“His starts have been horrible, first up when he won at Scone and again at Tuncurry. “He’s got a bad habit of putting his foot up on the gates but obviously Josh was aware of it and rendered it today and it worked out really well.”

New Tycoon, a $85,000 Inglis yearling, is raced by Glenvallen Investments.

The Bjorn Baker trained gelding was resuming from a spell and looked well placed coming off two impressive trials.

Jason Collett settled the three-year-old just behind the leader and hit the front on straightening.

He fought on strongly in the straight to score a length win over the Portelli trained favourite Long Weekend ($3), with Skyray ($7) from the Clarry Connors stable, third.

A $220,000 yearling, Ocean Emperor ($3.50) has now had two wins from three starts, having tasted success on the Kensington track last preparation.