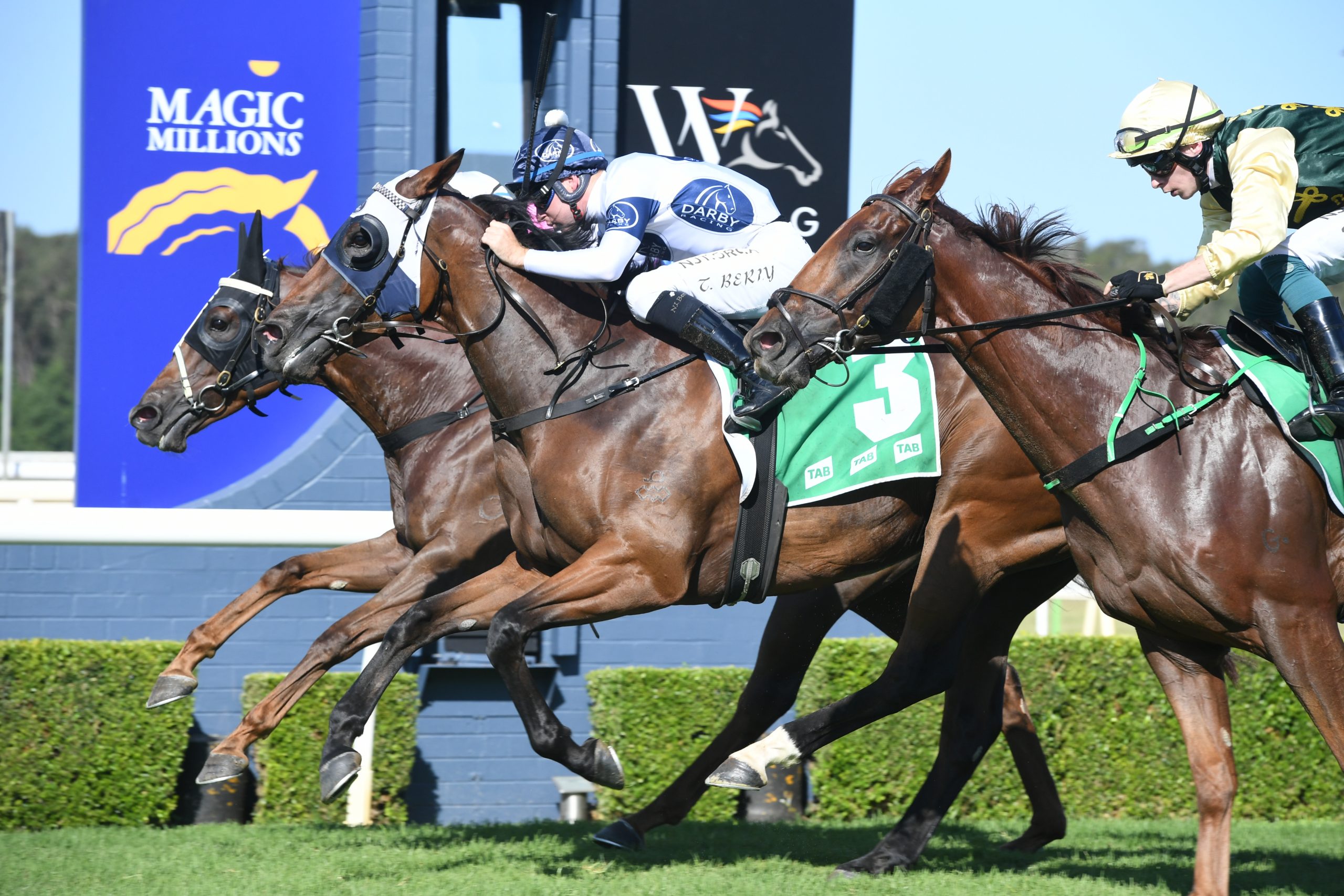 Tommy Berry put in a masterful riding display to claim four winners across the seven races including the SKY RACING SUMMER PROVINCIAL SERIES heat with Trajection.

Edward Cummings’ Tri Nations will join them in the January 2 series final at Wyong, after finishing third.

Berry had to weave a passage in the straight after coming from the rear of the field, but, timed his run to perfection.

“Tommy got the timing perfect, he’s been doing that all day,” Waugh said after the race.

“This mare is amassing a good record. She’s really handy and is tough and never wants to give up.

“She likes to be where she’s comfortable and if that’s the case she hits the line very strong.”

It was the sixth career win for Trajection, from 18 starts, and the first on her home track.

The camera was required to separate Trajection ($3.80) and Margie Bee ($17), with only a short half head between them.

The other Wyong runner, The Crimson Idol trained by Jeff Englebrecht, was just out of the placings in fourth.

Berry showed why he is currently leading the NSW jockey premiership, with an impressive display in the saddle.

He also partnered Shamani for the Freedman brothers, Yukon for Hawkes and Stoltz for Annabel Neasham.

A $200,000 yearling, Stoltz was given the perfect ride by Berry, who brought him from a midfield position to the lead in the straight.

He showed a good turn of foot and sped away from his rivals to win by a length.

The three-year-old was impressive when narrowly beaten at Canberra on November 3 and earned plenty of support, sent out $1.95 favourite.

Trainer Annabel Neasham was full of praise for the ride by Berry.

“Tommy is a great judge of pace and he got it right. It was a tricky gate, but I knew we had the right jockey on board,” Neasham said.

“He looked like he was travelling nicely in behind them and I thought they might have been overdoing it a bit upfront.

“It looked like he was going to let down in the straight, but it took a bit of time.

“He will get better from that win. He’s a horse that likes to feel really confident, that’s the key to him and he will take a lot of benefit from that.

“It’s great for Kia Ora, who kept a share in him and the Seldon’s, who pledged $500 to Tommy and his father John’s Movember Campaign.”

Berry piloted classy mare Shamani to victory in the 1600m WYONG EQUINE CLINIC 4YO & UP MAIDEN.

The win brought up a double for Berry and Shamani’s first win in her second race start.

The Freedman stable had expected the Shamexpress mare to be more forward, but Berry was unable to cross from the wide barrier and settled her toward the rear.

He rolled into the race on the turn and was forced wide but the four-year-old had too much on her rivals, racing away in the final stages to win by three lengths.

“Tommy knew he had the class underneath him and didn’t panic,” Libby Hopwood, representing Richard and Michael Freedman, said.

“She is tracking beautifully, and I like the way she acquitted herself today.

“It was a very good run at Kembla in her first start, but she picked up cough between runs,

“She had a nice trial between and looked like a nice race for her.

“We like her and think she will continue to improve as she gets over more ground.”

Shamani was sent out $2.90 favourite and beat The Fringe ($3.50) trained by Clare Cunningham, with Superb Time ($26) from the Grant Allard stable, third.

The Hawkes/Berry combination struck again with Yukon winning on debut over the 1350m.

He came back to his rivals in the straight, and Berry pounced with the Vancouver three-year-old scoring a narrow win in the VALE JOHN MCDERMOTT CHAMPION CALLER AND CHAMPION BLOKE MAIDEN.

In an exciting three-way finish, Yukon beat the Godolphin trained Jana ($8.50) by a short half head, with Clare Cunningham’s Big Lion ($4.80), a long neck behind in third.

Waterhouse/Bott debutant Nelspruit was impressive taking out the WYONG EQUINE CLINIC 4YO & UP MAIDEN.

The Zoustar gelding was too strong for his opposition in the final stages of the 1100m race winning by a length and a half.

Brenton Avdulla settled the four-year-old just off the leader in the early stages, gaining a narrow lead on straightening before pulling away in the final stages.

Stable representative Neil Paine, said it was an “exciting win.”

“It was great. Brenton rode him very good, sitting just outside the leader as Gai and Adrian had wanted,” he said.

“They thought there would be a little bit of pace in the race and didn’t want him to press on and lead and the horse just kept giving.

“He was against horses that had raced previously, more experienced horses.

“He’s taken a bit of time but has really improved and he won terrific.

“We’ve got some owners here and it’s very exciting for them.”

Nelspruit beat Stays On Tour ($61), who put in a much improved performance, from the Price Racing stable, with Miss Anticipation ($14) trained by Ron Leemon, third.

The three-year-old made it back to back Wyong wins, coming off a maiden victory over the same distance on November 7.

The Lonhro filly was given a cool ride by Jason Collett, who came from the rear of the field, charging home in the straight to win by a length and a half.

Stable representative Darren Beadman said Mollycoddle was in a “rich vein of form.”

“It was encouraging to see the way she won today,” he said. The speed of the race helped her, and Jason was cool as a cucumber.

“James has spaced her races and she seems to have thrived on that.

“This will be a good confidence builder.

“She’s a very lightly framed filly, there’s not a lot of her but she’s got the will to win and that’s what matters at the end of the day.”

Mollycoddle ($3.60eqfav) beat the Pride trained Titanium Power ($3.60) by a length and a half, with the locally trained Aytobe ($17) from the Partelle stable, third.

Tom Sherry put in a great ride to claim victory on the Sebring mare, holding out his rivals in the final stages to win by a short half head.

He deprived Jean Van Overmire, who finished second on the Anthony Cummings trained Fill Of Fun ($12), of a winning ride on his comeback from injury.

Buba ($5ef), the hard luck story of the race, from the Ryan Alexiou stable, was a close third.

Sherry had kicked away in the straight, after leading throughout and looked like scoring an easy win before Fill Of Fun and Buba stormed home.

The win was the tenth for the Connors stable in less than six weeks.

Segrill was having her 19th race start and has now had three wins and four placings.