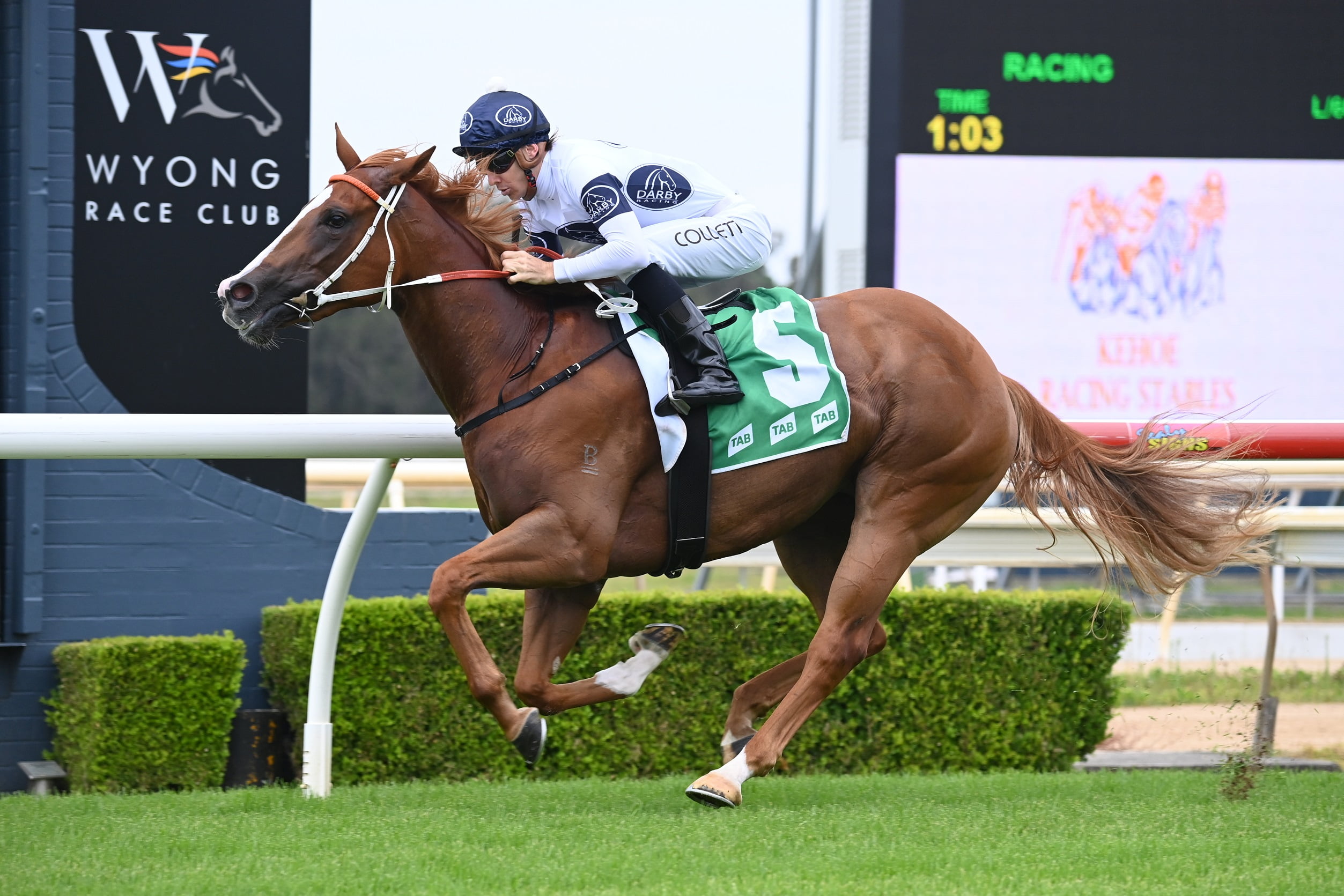 Tommy Berry and Jason Collett shared the riding honours bagging a double each on another great day of racing at Wyong.

Berry combined with the in-form Annabel Neasham winning on Rejoiced and took out the last on Flucuate for the Freedmans.

There were some impressive winners, including Gary Moore’s $600,000 yearling buy Chief Conductor who is headed to the Autumn carnival and Rejoiced, who made it three wins from four starts.

There was plenty of praise for the track, courtesy of track manager Phil Robinson and his staff, from senior jockeys and trainers.

The three-year-old brought up her debut win in impressive fashion, leading from start to finish over the 1100m.

Jason Collett pinged the gates on the Hawkes trained filly and had a soft lead throughout, drawing away in the final stages to win by a length.

“She was nicely educated,” Collett said. “She had good speed from the gate and made use of it.

“She was still a touch awkward in the middle stages, but the small track helped her skip away from them.”

Sirius Girl was resuming after two starts in her first preparation. She put in with an eye-catching trial at Rosehill on January 4 when she finished second.

Punters sent the Darby Racing filly out $3.70 favourite and weren’t disappointed. She beat Godolphin’s equal favourite Arbitration, who made up plenty of ground in straight, with Icing On The Cake ($4.80) from the Snowden yard, finishing third.

Trainer Gary Moore has a big opinion of the I Am Invincible three-year-old, out of Snitzerland, who was a $600,000 Inglis yearling.

Chief Conductor ($5.50) was having his first start for the stable, after being previously trained in Melbourne for his debut run, where he was unplaced at Geelong over 1140m in November.

He was transferred to the Moore stable and looked the goods when he took out a trial at Rosehill on January 4 by more than two lengths.

Moore said he had been very confident heading into the Wyong race.

“He’s a classy colt and I think there are better things to come for him,” he said.

“He was a little playful today and lacks race experience, but he will come on leaps and bounds from that. The stable is on a high, I’ll give him one more run in a Class 1 or BM64 and then look for something better.

“Tim rode him brilliantly. We’ll be looking for a stakes race over the carnival.”

Clark gave Chief Conductor a gun ride, sitting just off the leader before drawing away around the 100m mark. Joe Pride’s Just A Tiff ($6) stormed home to finish second, with a win not far away, while the Snowden trained favourite Hamaki looked to have every chance finishing third.

A great training performance by Warwick Farm based Robert Quinn, with Handsome King winning over 1600m in his first start for the stable.

The Hinchinbrook four-year-old had been with another trainer for his only previous outing in July last year, before owner Bill Tsang opted to transfer him to Quinn following a spell.

He trialled twice leading into the Wyong race, his latest a third at Warwick Farm over 1207m on December 30.

Quinn, a former jumps jockey, opted to have him resume over the 1600m and called on fellow Irishman Tom Sherry for the riding duties.

Sherry came from a rear position before the turn, circling the field and coming with a sustained run to snatch victory on the line.

He denied the locally trained Finnman ($6.50) from the Wayne Seelin stable his first win, after he looked the winner in the final stages.

“He’s a gorgeous horse and he keeps getting better in his work. He trialled super coming into this and I thought he would go well.”

Sherry congratulated Quinn on the  good job with the horse.

“It’s not easy to get a four-year-old fit and up to the mile first up. The horse is still green and has plenty of upside. He went to the line well.”

Annabel Neasham’s Rejoiced looked to be the best horse in the race and proved to be just that, with another victory to his name.

The Redoute’s Choice colt is racking up an impressive record, with three wins from just four starts and continues a super run for Neasham.

His only failure came at Gosford over 1600m on December 29, with the stable convinced the three-year-old didn’t handle the rise in distance.

Neasham dropped him back to the 1350m and under the cool hands of Tommy Berry, he had no trouble putting away his opposition.

“I thought he was the best horse in the race and gave him a nice easy time mid-race,” Berry said.

“I put the pressure on the corner, and he responded. He’s still learning his craft and will be a much better horse next preparation. It was a great training performance by Annabel to drop him back to the 1350m.

“I rode him knowing he was the fittest horse in the race, and he prevailed.”

Raced by Kia Ora Stud and Encompass Bloodstock, Rejoiced was sent out $2.60 favourite.

There seemed to be no excuses for the beaten brigade, Kim Waugh’s Fenech ($3.40) who was second, over Acoustix ($4.20) from the Tas Morton yard.

Collett conceded there was luck involved in bringing up his second winner of the day.

“I needed luck and I got it,” Collett said. “I was banking on it and once the favourite rolled off the fence, she had enough turn of foot to get through.”

Collett was able to angle Confessed through a narrow gap after being briefly held up for a run, the mare driving through to win by half a length.

Danny Greer, from the Lees stable, said Confessed had been a dual acceptor, the decision to run at Wyong proving to be a winning won.

“Kris opted to come here today, and it worked out. She appeared to be in a tricky spot in the straight but when the spilt came she was travelling well and was able to dash through and get the job done,” he said.

“She’s very versatile and continues to please. She’ll go through her grades.”

Runner-up Tanzimat ($8) from the Godolphin stable was doing her best work on the line, with Damien Lane’s A Fortunate Lass ($9.50) putting in an improved performance to finish third.

Con Karakatsanis made it three wins from three starts with his progressive filly Riva Del Sol.

The Press Statement three-year-old took the step up to provincial grade, racing in an unaccustomed position just off the speed.

“It didn’t really go to plan because I wanted her to lead and set the tempo, but it still worked out,” Karakatsanis said.

“It’s the first time she’s had to sit behind and push out and she did that well. She’s tough and it’s good to see her stepping up and getting the job done. She’s been a work in progress and I’m very proud of her.”

Winning rider Koby Jennings was also full of praise for the filly.

“Her heart is her biggest asset,” he said. “She’s not a very big horse and is still green. She had to improve a little to put this field away and that’s what she did.”

Jennings partnered Riva Del Sol to her previous win over 1000m at Nowra on December 31. She had debuted with a victory at Taree, on August 17 while under the care of Matthew Smith.

Riva Del Sol, starting at $5.50, got the better of the Mark Newnham trained $4.40 favourite Stormborn, with another great run by Stephen Schofield’s Mosht Up ($9.50) to finish a close third.

A slow start didn’t spoil the chances of short priced favourite Flucuate who made it back-to-back wins from just two starts.

Trained by the Freedman brothers, the Not A Single Doubt gelding, gave Tommy Berry a winning double and the jockey’s challenge, but it wasn’t clear sailing.

“He knuckled at the start and that fired him up,” Berry said. “He wanted to charge a little bit, so I was surprised he gave me as much as he did at the end.

“He’s got plenty of ability but just has to iron out those kinks. He’s in the right stable to do that.”

It was a good ride by Berry who pinched runs along the rails after the slow start. He chased down the earlier leader Apex, pulling away on the line to win by more than two lengths.

Flucuate was coming off a debut win over 1000m at Gosford on December 31.