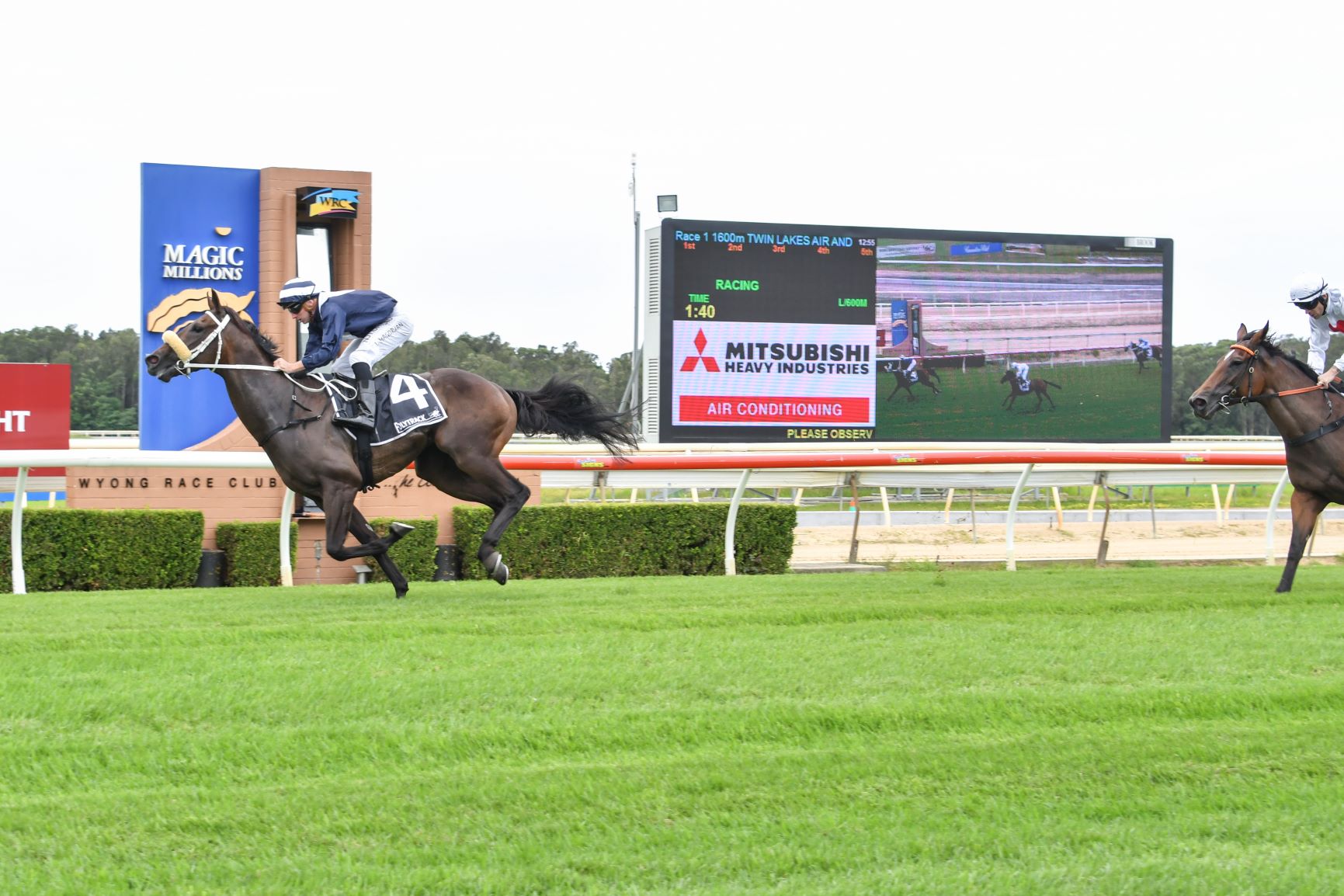 Disappointment for trainers with the Wyong Polytrack Provincial Championship Qualifier called off due to heavy rain late in the day.

The $150,000 heat was to be the last race on the program but a deluge resulted in the race being postponed due to visibility concerns.

Racing officials will likely add the race to the Newcastle program on Tuesday.

Earlier in the day Chris Waller and Lee Magorrian combined to take out two races, the first with promising prospect Kinane.

The stable looks to have another smart stayer on their books after Kinane’s impressive win in the TWIN LAKES AIR AND SOLAR MAIDEN over 1600m.

The Reliable Man gelding was having his second start for the stable, after a luckless second on debut over 1400m at Warwick Farm on March 11.

The three-year-old was previously been trained by Mick Kent and had been nominated for feature staying races by that stable.

Punters installed him as the $1.45 favourite and he didn’t disappoint, drawing away in the straight to score by more than two lengths.

Jockey Lee Magorrian settled the three-year-old off the speed, and despite hitting a flat spot on the turn, he drew away for a convincing win.

“It was a very good ride by Lee. They put the pace on early and he was run off his feet, but Lee was patient and let him work through his gears before he put them away.

“It’s good to get the maiden out of the way. I think we’ve got a pretty promising horse on our hands.”

The Anthony Cummings trained Dame Margot ($5) was second from Urbino ($3.90) from the Lees stable.

An exciting finish in the 1350m PANASONIC AUSTRALIA CLASS 1 with Earth Song ($8) bringing up a double for the Waller/Magorrian combination.

The Nicconi filly, a $105,000 yearling purchase, came from the rear of the field, with Magorrian weaving a passage mid-race before hitting the lead close to the line.

The three-year-old, resuming from a spell, brought up her second win from seven starts.

She beat the fast finishing Lady Tavista ($11) from the Widdup stable by a head, with the Pride trained Big Bad Bruce ($5) third.

A beautifully rated ride by Andrew Gibbons brought out the best in Elisa Carolina ($5) who scored her first win for the Lees stable with a strong staying performance.

Gibbons was able to lead throughout, dictating terms in the small field.

He managed to stave off his opposition in an exciting four-way battle in the straight, to bring up the filly’s second career win from seven starts.

“Gibbo showed his hand in the early stages and dictated the pace. It was a nice ride,” Greer said.

“She’s only been in the stable for a short time but is a nice horse to have in the stable. She’ll stay all day too which is good.”

The Godolphin trained Tahuna ($4.40) was second, from the $1.85 favourite Sciconic, from the Freedman stable.

A dominant win by speedy Godolphin galloper Emanate ($1.90) to take out the LAKE MACQUARIE SHEET METAL MAIDEN over 1000m.

The impeccably bred Lonhro filly showed her class leading from the outset and letting down in the final stages to win by almost two lengths.

The three-year-old was runner-up on debut at Hawkesbury on March 7 and started $1.90 favourite.

Kent Wade, representing James Cummings, said they were confident coming into the race.

“She had to work hard from a bad alley at her first start,” he said. “She’s had a good week leading into this and we thought she’d be hard to beat.

“It was a great, controlled ride by Jeff and her breeding came through.

Irish apprentice Louise Day posted a victory for her former boss Ciaron Maher, with Major Murphy ($11) causing an upset in the VIETNAM VETERANS HOSTEL 2YO MAIDEN over 1200m.

In an action-packed race, Day came from the rear of the field in the straight to upset some of the more favoured runners and post a half-length win.

Princess Betty ($7.50), from the Waugh stable, looked to have the race won before Day swooped in the final stages.

Day worked for Maher in Melbourne for almost two years before being apprenticed to Kris Lees.

The Maher/Eustace trained Major Murphy, a $130,000 yearling, had been unplaced in two Randwick barrier trials leading into the race.

The Waterhouse/Bott $3 favourite Only Mine tapered off from the start and failed to finish, while Spin That Wheel was scratched at the barriers.

Estroverto broke through for a well-deserved win in the 1200m VIETNAM VETERANS HOSTEL 2YO MAIDEN.

The Pierro gelding, trained by Kylie Gavenlock and ridden by Digger McLellan, had eight placings from 17 starts leading into the race.

He was installed as $5.00 second favourite on the strength of his last start third at Hawkesbury.

McLellan settled the four-year-old midfield, circling the field around the 600m mark and hitting the front on straightening.

He was able to hold off his rivals to score a length and a half win.

He beat the Stephen Schofield trained Quick Snip ($21), with the $3.30 favourite Derbari, from the Pride stable third.

Ridden by Christian Reith, the All Too Hard filly, relished the heavy conditions to bring up her second win from eight starts.

The three-year-old scored her first career win on a heavy track and with rain falling punters were keen to support her, with the filly starting $3.40 favourite.

She ran down the race leader Iconic Star ($7.50) in the closing stages, showing a great turn of foot to beat the Portelli trained Moccasin Miss ($10) on the line.

“It was great to get the rain late, that really helped her,” Widdup said.

“She’s a very honest little filly but she doesn’t win out of turn.

“I was expecting her to run well in this type of grade.”