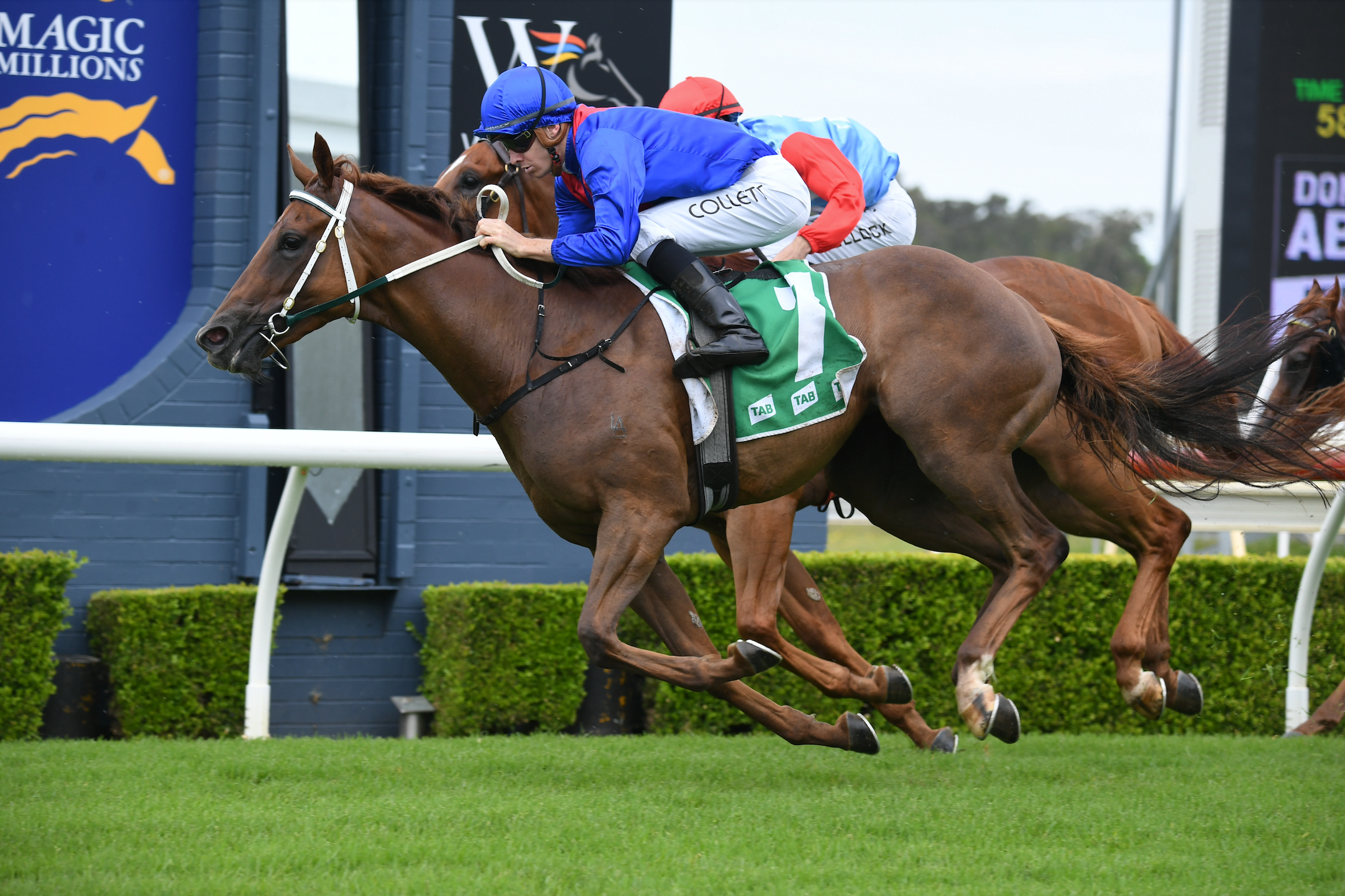 The Matthew Smith stable had plenty of reason to celebrate saddling up the first two winners on the program.

Debutant Per Ivy and Bedford Square didn’t disappoint, both sent out favourites on the strength of their recent from.

Per Ivy had great trial form, while Bedford Square was rewarded for her consistency after running six placings in nine starts.

Jason Collett bagged a double with Per Ivy and Glittery.

The predicted rain didn’t eventuate until late in the day, with a storm resulting in the last race to be abandoned.

Matthew Smith looks to have unveiled a promising filly in Per Ivy who backed up her impressive trial form with a debut win.

The Per Incanto three-year-old looked was under heavy riding and looked to be in trouble on the turn after Kristen Buchanan’s One Way Street kicked away.

But she put her head down in the final stages and overhauled the leaders on the line to win by a long neck.

“The speed really suited her, but she did a few things wrong in the middle stages.

“The racing experience is going to help her, but it was a good start to her career.”

Per Ivy was coming off an eye-catching trial win at Rosehill on November 8.

She earned good support in a strong betting race, sent out $2.70 favourite.

She beat the $2.90 second favourite One Way Street, from the Kristen Buchanan yard, who also looked strong in his first start.

The three favourites finished in market order, with the Ryan/Alexiou’s Miss Maz ($3.50), third.

A running double to the Matthew Smith stable after Bedford Square brought up a well-deserved win.

The Tavistock mare had been placed in six of her nine starts and was coming off a fourth at Canterbury on November 12.

The stable had considered both the Wyong track and track conditions would be ideal and the plan worked to perfection, with the four-year-old gathering in the leader late to bring up her first win.

Joe Curran, representing the Smith stable, said it was a great start to the day.

“It’s very pleasing to get the first two home and great to see this mare finally break through.

“It was a very good ride by Jay (Ford) because they were walking early and our plan had been to be a bit further back,” he said. “He used his initiative placing her second for most of the trip and she finished strongly.

“The Canterbury run really put the writing on the wall and being by Tavistock she could be even better over more ground.”

Well bred filly mare Too Much Lippy continued a super run for the Ryan/Alexiou stable bringing up their seventh winner for the month.

Bred and raced by John Singleton, the four-year-old was having only her second start but looks set to progress through the grades.

She debuted in March with a second at Goulburn and was given a trial heading into the Wyong race.

Nash Rawiller gave Too Much Lippy ($3.10) the perfect ride, holding her together into the straight before letting her down in the final stages.

The win was never in doubt, despite a mid-race move by Tommy Berry who circled the field on John Sargent’s Gin Martini ($3fav), but couldn’t sustain the run, finishing second. Gary Moore’s Stay Wealthy ($3.10), appeared to have every chance finishing third.

Rawiller said the winner, a son of More Than Ready, could progress off the victory.

“She’s been lightly treated for a four-year-old mare but had a few little issues and took a long time to mature. I wanted to hold onto her as long as I could and let her show her dash and she certainly did that.

“She’s got a bit of rating in hand now.”

An eye-catching win by the Waller trained Niffler coming from behind in a slowly run race to overhaul her rivals.

The Chris Waller trained mare, another winner on the program by Tavistock, looks headed for better races after bringing up her second win from as many starts.

Niffler came from near last on the turn and chased the three leaders down the straight, rounding them up in the final stages to win by more than a length.

Bred in New Zealand by iconic breeders Sir Patrick and Lady Justine Hogan, the four-year-old was sold at Karaka for $200,000.

She debuted with a win at Kembla on April 3 and was then spelled, resuming with two trials.

“She gave me the impression she’ll take the next step,” he said. “Chris and his team did a great job to get her ready to win over 1350m, when ideally she’ll be better suited over the mile plus.

“I always go into the races confident when I’m riding one with the Waller bridle and Debbie Kepitis as the owner.”

Penopera gave Jason Coyle plenty of reason to celebrate, the mare breaking through for her first win.

Coyle bred the four-year-old having trained her mother Ashlee’s Jewel, and now races her.

She had been racing without luck in several of her recent races and was placed fourth at Gosford over 1100m at her last start.

Penopera ($12) was given a great ride by Jess Taylor, who was toward the rear of the field on straightening.

She had plenty of momentum in the straight and found a gap through a wall of horses to post a half length victory.

Taylor returned to scale cheered on by her two young daughters.

“It was exciting to have a win in front of the girls,” she said.

“This mare has been getting better with each run. She is so consistent and there’s not a lot of her.

“I was three wide with cover but I think it helped having a bit of room today.

“I was confident from the top of the straight and had a lovely run through.”

Hypnosis ($6) from the Baker stable, showed plenty of heart fighting on for second, over the local trained and ultra-consistent Mister Ripley ($9) from the Rod Bailey yard.

It was a race in two in the straight with Never Second and Glittery neck and neck before the Godolphin runner got the upper hand on the line.

A half-sister to multiple Group 1 winner Bivouac, Glittery ($3.50) was having her sixth career start, having brought up her maiden win at Gosford in June.

She was given a well-timed run by Jason Collett, who fought out the finish with fellow leading rider Tommy Berry, on the Neasham trained $2.50 favourite Never Second.

Joe Pride’s Macomo ($6) was two and a half lengths behind in third.

Darren Beadman, representing the stable, said Glittery had come back better from her spell.

“Her coat was glistening today, and she came into the race today with the right sort of lead up,” he said. “She’s a very well-bred filly and that breeding will hold her in good stead into the future.

“She went well in a very strong trial at Warwick Farm and had a good bit of time between the trial and today’s run. It worked out perfect.”

The win brought up a double for Collett.