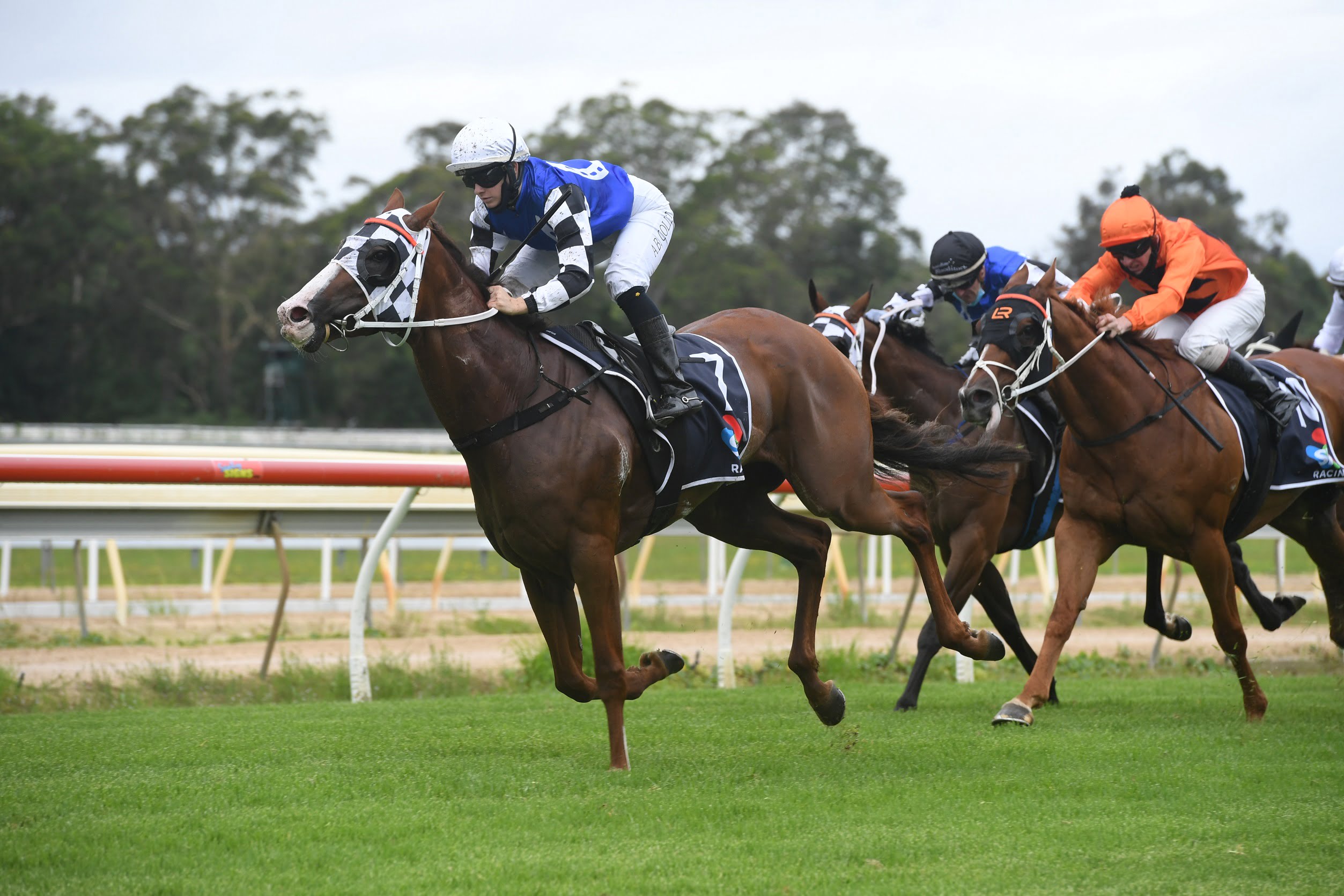 It was a Kris Lees trifecta in the $150,000 final of the Sky Racing Summer Provincial Series with Itz Lily a dominant winner over stable mates Spanish Point and Game Of Thorns.

The win gave Lees his second successive final win in the popular series.

Itz Lily, the $3.30 race favourite, relished the heavy conditions and despite being caught three wide throughout, Alysha Collett kept her cool hitting the lead on the turn and drawing away to score by almost two lengths.

Danny Greer, representing the Lees stable, said it was a terrific effort by Itz Lily, a $80,000 yearling, after a tough run.

“She didn’t have a lot of luck in the run but was very dominant working into the race nicely and putting them away a long way out,” he said.

“It’s good to see her come back in really good order.

“Australian Bloodstock provided us with a couple really nice horses in this race.

“We were also happy with the effort of Spanish Point, who is improving with racing.”

Greer was full of praise for the ride by Collett.

“She didn’t panic at all and improved into the race at the right time. It was good to see her sustain that sprint and she put them away a long way out from the finish.”

The win brought up back-to-back victories for Itz Lily, who took out the Newcastle heat on December 19.

The consistent Snitzel mare has now had six wins and seven placings from 21 starts.

A terrific training effort by Kylie Gavenlock to taste success with Go For Gold after more than 15 months off the scene.

The five-year-old was having only his third career run but was sent out at $3.50 on the strength of a strong barrier trial at Wyong on December 18.

Jockey Andrew Gibbons had him in the box seat throughout the 1200m LAKES OFFICE CHOICE 4YO & UP MAIDEN and was able to get the edge over his opposition in the final stages.

Gavenlock said it was great to get a win for the connections, who include prominent owner and breeder Kim Harding.

“They have been very patient,” she said.

“He had some real issues with the barriers and that’s why he has been off the scene for so long.

“We think he’s got it now and he trialled nicely here which is why we brought him back.

“I think he’s a very nice horse, but I was a bit worried he may have been a little underdone today.

“He had missed a bit of work leading into it and he’s a gross horse and a good doer.

“I thought if anything would of beat him today it was his condition, but he got the job done.”

A $360,000 yearling Go For Gold was resuming from a lengthy spell, having previously been trained by Les Bridge.

He beat Good Deed ($5), from the Hickman stable, with Tracey Bartley’s Stonesthrow ($6.50) third.

A very dominant win by the Snowden trained Exoboom who justified his short price posting a seven-length victory in the LAKES PRINTERS MAIDEN over 1350 metres.

The Exosphere gelding was first past the post on the Kensington track on December 17 but lost the race on protest.

At his previous two starts he was runner-up at both Kensington and Newcastle.

He wasn’t to be denied at Wyong breaking through for his debut win in the best possible way.

Apprentice Brandon Griffiths had the $1.26 favourite just behind the leader in the early stages, before hitting the front around the 600m mark and drawing away in the straight for an effortless win.
Ben Bloore, representing the Snowden’s, was full of praise for the victory.

“It was a good win. Brandon put him outside the leader, let him settle and balance up, and then coming to the corner he let him go and said goodbye,” Bloore said.

“It was a good ride. Brandon has nice, strong good hands and can get them to relax in the run.”

“He’s still very immature. He’s a big lanky horse with plenty of scope about him. The more he races the more mature he gets.”

It was a double for the Snowden stable and their apprentice Brandon Griffiths, when Sahra ($2.15fav) greeted the judge in the CAVARNI DESIGN BENCHMARK 64 over 1200m.

Griffiths put in another strong ride to claim victory on the Hinchinbrook filly, her second win in six starts.

Ben Bloore described it as a “very good win.”

“She will take a lot of confidence out of that. Brandon rode her well and didn’t panic.

“He took off at the right time and didn’t panic, just cruised up around them, hit the button and away she went.

“She’s had a few little setbacks here and there. The drop in grade today has helped her a lot and she will take a lot out the win.

“Two winners from two runners should keep Pete happy for another week.”

Cathay ($8) from the Portelli stable was second, two lengths behind the winner, with Godolphin’s Raison D’Etre ($3) third.

Godolphin filly Geist made it back-to-back wins in the 1100m CANADIAN CLUB CLASS 1 courtesy of a great ride by Christian Reith, the first of a winning double for stable and rider.

The in-form jockey had to weave a passage in the straight after coming from behind the pack on the turn.

He drew away in the final stages to win by three quarters of a length.

The double brought up 14 wins for Reith in just over a month, the jockey having posted 36 victories to date for the season for a 20 percent win ratio.

Geist was having her 10th career start, having raced in Victoria for the early part of her career.

She was unable to break her maiden in the southern State despite finishing third in the Group 2 Blue Diamond Prelude at Caulfield in February.

She broke her maiden at Hawkesbury on December 13 over 1100m and again found the distance ideal at Wyong to bring up successive wins.

She beat Kim Waugh’s Tinka’s Lad ($7), with Harmonium ($6), from the Richard and Michael Freedman stable, third.

It was a double for stable and rider after Mollycoddle’s victory in the WYONG’S NEXT RACEDAY SUNDAY JANUARY 24 F&M BENCHMARK 64 over 1350m.

Another super ride by Reith, who came from last on the turn, secured victory for the $2.10 race favourite.

It was the third win for the Lonhro filly from 10 starts, all three coming on the Wyong track.

“She is very consistent this time in, has strengthened up and is a mare in form,” he said.

“Last start she finished second behind Private Eye who came out and won in town today, so the form is franked there.

“I’d say she’ll head to town, but the team will take her back and tick her over and see where we got next.”

Kunde said he wasn’t concerned when Mollycoddle was well back in the field.

“She was always travelling. He cut the corner and it worked out good and she powered through the line.

“She’s been in a purple patch of form and it was a great ride today.”

Mollycoddle scored a length and a half win over the Waterhouse/Bott trained Tastebud ($12), with Duchess Marizza ($6.50) from the Maher/Eustace stable, third.

The well-bred Deep Impact colt was having his fourth start, having been placed twice on Metropolitan tracks and once on the Provincial circuit.

Jockey Lee Magorrian came from behind on the turn and was able to get a split on straightening, with the three-year-old speeding away to win by almost a length.

“It looked a bit precarious once they jumped because he got shuffled back and looked like he was going to land in an awkward spot,” Hewson said.

“But the horse responded to Lee’s riding and pushed forward to be in a good position.

“He was able to whip around the two leaders on the turn to be in the clear. That’s a good thing about Wyong, they can fan across and get out in the straight.

“He was lucky the split came, and it was good riding by Lee to drive the horse through.”

He beat the John Thompson trained Speedzone ($7), with Jauhera ($5.50) from the Ryan/Alexiou stable, third.

A convincing win by the Paul Perry trained Skylab ($8.50) to take out the COMMAND BUILDING AND CONSTRUCTION PTY LTD CG&E BENCHMARK 64.

The Real Impact gelding was resuming from a spell, after breaking his maiden and being placed twice in four runs in his first preparation.

Shaun Guymer settled the three-year-old toward the rear in the early stages, before rounding the field at the 600m mark and hitting the front on straightening.

He drew away in the final stages to win by two lengths, handling the heavy nine conditions.

Skylab, a $48,000 yearling, looks to be developing into a promising stayer, having recorded a Newcastle win over 1875m at the end of his last preparation.