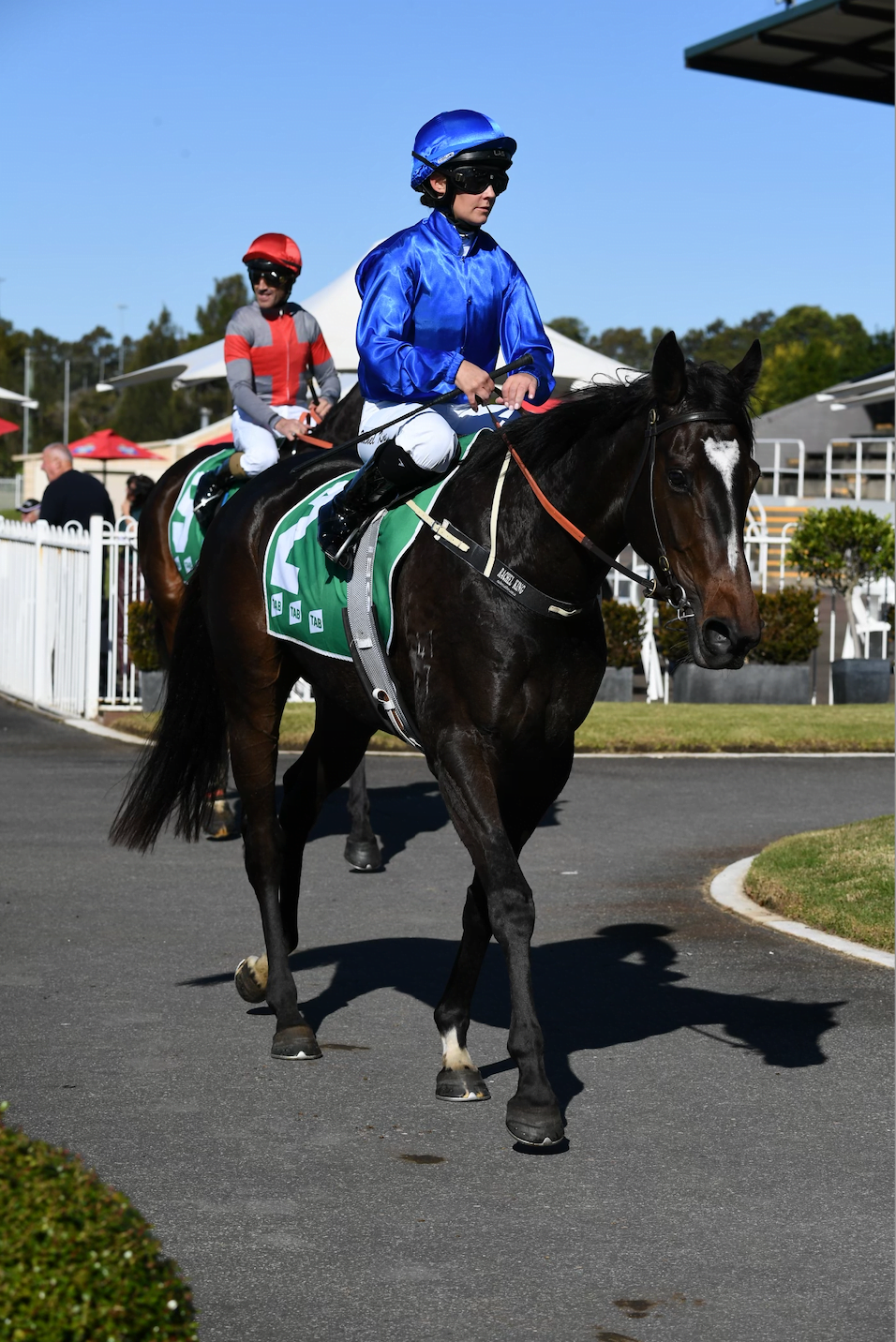 IT wasn’t a feature meeting by any means – but it is one RACHEL KING won’t easily forget.

The expatriate English woman, who has made an outstanding success of her Australian riding career, reached a milestone when she hit a century of winners for the first time in a season.

And she produced a typically brilliant performance to post her 100th winner when she scored on favourite TANGIER in the opening event.

King began riding in her adopted country only in March, 2015 when she rode her first winner Run Cannon Run at Tamworth, and her previous best season performance had been 88 winners in 2016-17.

Now a Group 1 winner, she is firmly entrenched in Sydney’s riding ranks.

This was CLUBSNSW Central Coast Itty Bitty Charity Race Day, held to raise important funds to brighten the lives of sick and disadvantaged children on the Central Coast.

There was no shortage of excitement with the day’s shortest-priced favourite, Kristen Buchanan’s OAKFIELD CHEROKEE scraping home in a tricky photo-finish which had many thinking he had gone under, and two races later the judge this time was unable to separate favourite BUDHWAR, from the Damien Lane stable, and second favourite GENERAL DUBAI in another enthralling battle to the post.

While not one trainer or jockey dominated the program, Sam Clipperton did best by winning the second race on Stonesthrow for Wyong’s Tracey Bartley and then dead-heated on GENERAL DUBAI for Peter Robl.

THE betting ring action was mirrored on the track though at the end it really wasn’t a two-horse race at all.  James Cummings’ TANGIER ($2fav) and Mark Newnham’s ANGEL SISTINA ($2.60) clearly dominated discussions pre-post, and it was the former who proved too good for her main rival. TANGIER enjoyed a perfect run cruising along on the inside under Rachel King and the breaks went her way at exactly the right time when she got into the clear and eased around the heels of the two leaders, MANDALONG FLAG ($61) and ANGEL SISTINA, on the home turn. Once she gained her momentum, TANGIER had no trouble overhauling ANGEL SISTINA and was strong through the line without being pressured. The Medaglia D’Oro filly was having only her third start and looks capable of stretching out over more ground. A daughter of Exceed and Excel mare ESSAOUIRA (who raced only twice and won at Moonee Valley as a two-year-old), TANGIER is a sister to the Group 1 winner ASTERN, who now stands at stud for Darley. ANGEL SISTINA was game after doing work from her outside barrier in the field of seven, and MANDALONG FLAG battled on well. RIVER TYCOON ($8) ran last after being slow out and stewards are waiting to hear an update on the gelding’s progress from trainer Mark Cross before deciding any further action.

IF the first was for the “out of towners”, this was definitely one for the locals. Wyong trainers Tracey Bartley and Damien Lane saddled the two favourites – and they fought out the finish. Bartley’s heavily-backed favourite STONESTHROW ($2) was cleverly ridden by Sam Clipperton, bouncing well from her outside draw and then being restrained to sit off Lane’s BUCKIN RIPPA ($3.10) and MISTER RIPLEY ($5). When the pace surprisingly eased mid-race, Clipperton took the bit between his teeth and raced his mount to the front. STONESTHROW responded by comfortably holding out BUCKIN RIPPA, who notched his 10th placing from 22 starts – and connections must be wondering when a breakthrough will come? MISTER RIPLEY hung on for third for another local Rod Bailey, making it an all-Wyong result. STONESTHROW, a four-year-old daughter of 2013 Royal Randwick Listed Dulcify Quality, 1600m winner Rock Hero (by Fastnet Rock), was having only her third start, as with the opening winner, and her trainer was confident she would be hard to beat first-up on the back of two recent good trials and believes she will probably manage further later. “I expect she is in for a really good preparation,” Bartley said. BUCKIN RIPPA’S rider Aaron Bullock, when queried afterwards by stewards, agreed he should have allowed his mount to set a more genuine tempo in the early stages.

THE Bartley stable played up its winnings with an attempted long-priced coup on first-upper EMPOWERMENT ($19 to $5.50), but fourth was the best the filly could do. Gosford trainer Adam Duggan took the honours, producing debutant SYZYGY STARS ($8.50) to kick off her career in the best possible manner. Rider Josh Parr had the three-year-old daughter of 2015 Golden Slipper winner VANCOUVER (beaten only once in five career starts) in touch with the leading group throughout and brought her to the centre of the track on straightening. She finished with real determination to overhaul SARANDOS ($7.50) right on the post. The runner-up almost gave his dam, Doomben Cup winner Streama, two Provincial wins within a week as his older half-sister PENSERA scored at Newcastle last Saturday. SYZYGY STARS was a $65,000 buy at the 2019 Australian Easter yearling sale; a fair bit cheaper than $400,000 2019 Magic Millions buy SARANDOS. Duggan, a smart man with a horse, was concerned beforehand the 1100m on the tight track might be a bit short for his filly, so she should be worth following. Another first starter DA NANG STAR went to the post a $2.50 favourite and had his chance, weakening in the run home to finish fifth. His rider Rachel King suggested the addition of blinkers and a step up in distance may lead to a better showing next time.

TRAINER Gary Moore devised front-running tactics to upset odds-on favourite VOLTERRA – and who better to carry them out than Tim Clark, who has no peer when it comes to dictating pace up front. Clark had no trouble assuming the front on Moore’s LUCKY TO WIN ($5.50), who broke through at his 10th start. He was never really in any danger, holding out LEKVARTE ($8) and CONTAMINATION ($5.50). Moore, recovering from a recent knee operation, was convinced his horse couldn’t stay and told Clark to lead and “go for home at the 400m”. “I have made some adjustments with his feeding, and his work indicated he was in great order and ready to go,” Moore explained. LUCKY TO WIN when third had finished a decent way behind VOLTERRA (2nd) in a recent 1400m race at Warwick Farm, but Clark’s tactics enabled him to turn the tables – and how! The winner was pinhooked for $33,000 as a weanling and later fetched $210,000 when offered at a 2yo’s in training sale at the Gold Coast in 2019. Punters won’t easily forgive VOLTERRA ($1.80), who went back to last from his outside draw in the small line-up of six and never looked likely to raise his backers’ hopes, finishing fourth. A $1.3m yearling buy, he has a long way to go to recoup such an outlay. Stewards questioned rider Brenton Avdulla, who said he had been instructed to ride the gelding conservatively and anticipated settling last. He added VOLTERRA raced keenly and, in his opinion, was not suited by the moderate tempo and as a result didn’t finish the race off as expected.

PHEW! Thrill seekers who dived in to take the prohibitive odds about hotpot OAKFIELD CHEROKEE ($1.35) must have been shaking in their boots, especially when race caller Mitch Manners intimated $12 chance ZAK might have kicked back and won the day. Thankfully, there was a narrow margin for the favourite, a younger brother to now retired multiple Group 1 winner LUCIA VALENTINA, in a finish which virtually fooled everyone. Trainer Kristen Buchanan said it took an astute ride to win at Wyong and stressed upon rider Aaron Bullock “not to miss the boat”. A $155,000 yearling buy, the lightly-raced four-year-old is starting to hit his straps after overcoming heart arrythmia issues earlier. A trip to the Grafton July carnival for a 2200m Rural Plate is now on the cards for the gelding.

IN his first season, Newcastle apprentice Dylan Gibbons keeps kicking goals. This was his first ride for trainer Annabel Neasham and he took full advantage of $2.60 favourite OSAMU’S inside draw to boot through and lead. OSAMU had garnered a “loser” tag with eight minor placings before breaking through at Newcastle on May 1 for senior jockey Rory Hutchings, and Gibbons made sure another placing didn’t arise by booting the gelding clear on straightening and then holding off BEAUCHAMP ($7). Gibbons’ 3kg claim proved invaluable lessening the gelding’s 62.5kg, and the youngster chalked up his 67th winner; an outstanding effort in any circumstances given his relative inexperience. Second only to Scone’s Reece Jones (86.5 wins) in the State’s junior riding premiership, he is obviously a star of the future. It wasn’t the best of days for another rising star, Neasham, who was fined $7000 by stewards in Sydney and had Cox Plate favourite ZAAKI disqualified from his second placing in the Group 3 JRA Plate at Royal Randwick in April, having presented him to race with a prohibited substance analysed in his pre-race blood sample. OKAY OKAY was a late withdrawal at the barrier when found to be lame in the off-hind leg.

The judge couldn’t separate favourite BUDHWAR ($1.75) and PRINCE OF DUBAI ($6), who had stalked him throughout and switched around his heels on straightening to issue a challenge. Jason Collett tried hard to squeak home on heavily-backed BUDHWAR for local trainer Damien Lane, but it wasn’t to be. GENERAL DUBAI’s rider Sam Clipperton had won earlier on STONESTHROW for Tracey Bartley and this time got Peter Robl a share of the major spoils. In a bustling finish, evergreen local sprinter ISORICH ($7.50) was a close third at his 134th start. The rising 11-year-old continues to beat time and has earned his connections more than three quarters of a million dollars in prizemoney.

BRENTON Avdulla could not have produced a better ride to send favourite backers’ home on a happy note. DUNDEE LEE ($3.10 after $4 was offered earlier in the day) became the fifth favourite to score, and of course another, BUDHWAR, dead-heated. On a day where it was important to be up on the pace (the rail was 3m out), Avdulla put the Newcastle mare in a winning position from the outset, then got a split on straightening. Vigorously ridden, DUNDEE LEE held on to defeat ACHI BABA ($12 to $7.50) and SALSA MAN ($8.50), who invariably races well at Wyong. The five-year-old daughter of DUNDEEL has now won six races for her connections, and added to a couple of good days for Newcastle’s KRIS LEES, who also won races at Doomben and on the Kensington track yesterday.